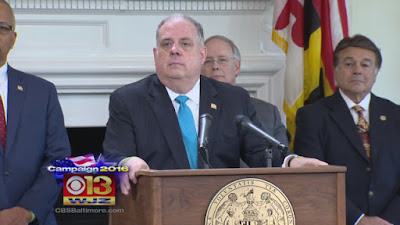 ANNAPOLIS, Md. (WJZ) — Governor Larry Hogan is speaking out about the 2016 presidential election. For the first time, he has publicly said he will not vote for Donald Trump or Hillary Clinton.

Governor Hogan said he’s not thrilled about either candidate and won’t let party politics stand in the way of his judgment.

“I mean, there’s no way I can vote for Hillary Clinton, but in good conscience, I wasn’t a supporter of Donald Trump either. I don’t think either party has put up the best candidates. I’m a little frustrated and a little disgusted with national politics these days. I’m trying to stay focused on Maryland,” Gov. Hogan said.

Lost a lot of respect for Gov. Hogan over this. Who he votes for is his business. No one else's.

When asked by the press about voying for Trump he should have told them to "Go @#$% themselves", it is his right to a secret ballot.

But once again idiot Republicans allow the press to manipulate them.

Ignorant on his part not voting at all is a vote for Cliton.

The only way I will vote in the upcoming election depends on who Trump picks for his VP. Ted Cruz would be great but Trump burned that bridge. I hope it's not Gingrich....he is a jerk.

I love our Governor but his decision to not support the Republican candidate is a little outrageous and I'm disappointed he publicly made such statements!!!!

This election, for many, is about voting against someone instead of voting for someone. Neither party elected their best qualified person. As a republican, Gov. Hogan should be voting for his party.

It is still 4 months away, and for 4 months, Hogan has to work through the R's and D's to get Maryland back on its feet. Declaring one way or the other today would take away 4 months of any accomplishments. It' a secret ballot, and I hope he pulls the right lever, but he won't be able to tell us that after Nov. either.

I think Hogan will learn a big lesson for opening his mouth in the beginning when Trump announced he was running. Most never thought, (especially Hogan) Trump would succeed and now Hogan is stuck with his foolish statement.

Not voting for Trump, (or your party) is just plain foolish and encourages others to do the same. Second huge mistake by Governor Hogan.

Finally, it's nobody's business who Hogan votes for anyway. Voting is mostly private. Some like to say who they voted for but many do not. Why, because it's none of your business. He should have kept his mouth shut, period.

Not a problem. I will not be voting for clinton or hogan. even though he was not a perfect candidate, I voted for him because he was the best choice. Now he cannot return the favor. WHO's NEXT!!!

hogan can go to hell. I never call him governor again. dogg is exactly right. We ONLY voted for hogan not because we thought he was a good candidate but because brown was the worst of the worst. Not voting for Donald Trump is a vote for clinton so that only means he is a clinton supporter and that speaks to his lack of any decency whatsoever.

Hogan is an ethical man. He looks better and better every day.

The elections are rigged.
Wake up folks.

Hillary will take good care of the bankers, who are her bosses, and our masters.

Hogan has not learned never say NEVER. Circumstances can change between now and the election. At this point Hogan has backed himself in a corner. IMO he has three choices now. (1) wri on the ballot (3) not vote for a Presidential Candidate. Sadly he is unable to support the Republican party and even more astonishing is he shares with us, he cannot vote for Trump or Hillary. Good grief is Hogan not aware we vote by secret ballot. I read in his statement "I cannot support the GOP because I do not support the GOP candidate.

As disappointed as I am in Hogan making the comment, I cannot say I would NEVER vote for him because of it.

Gov Hogan,
I fully understand where you are coming from, though I support Mr.Trump.
I voted for you, not knowing anything about you.
I have been very pleased and pray for Hogan Strong daily.
I don't expect to agree with everything you do on the job, but would have been satisfied if you kept the voting statement to yourself.
I would vote for any republican (not happy with them), to at least vote against the Clinton.
Again, I voted for you actually to vote against Brown.
None of my votes are calculated on party, but person.
I just didn't want Brown or Clinton.

It doesn't matter who becomes president. Both candidates are bad for the country. Either way, Congress will continue to run this country.