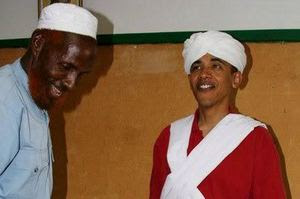 The Obama Administration is on pace to issue more than a million green cards to migrants from majority-Muslim countries, according to an analysis of Department of Homeland Security data.

A chart released by the Senate Subcommittee on Immigration and the National Interest Friday details the surge in immigration to the U.S. from majority-Muslim countries since President Barack Obama took office in 2009.

The total 832,014 new permanent residents do not include migrants on temporary, nonimmigrant visas — which allow foreign nationals to come to the U.S. temporarily for work, study, tourism and the like. As the subcommittee notes, the number also does not include those migrants who overstayed the terms of their visas.

The crescent moon is the most common Islamic symbol. In fact, it is found on the top of every Muslim mosque around the world and on the flags of many Islamic nations. The crescent moon represents the god of Islam, Allah, who was the pagan moon deity of Mohammed's tribe, the Quraysh of Arabia. When Mohammed conquered Mecca in Saudi Arabia by force in 630 A.D. he destroyed all of the 360 pagan tribal deities in the Kaaba and set up his tribal deity, the moon god, Allah, as the chief deity of Arabia. Later, when he tried to convince the Jews and Christians of Arabia to worship Allah, they refused, knowing the true identity of Allah, and Mohammed then began his bloody conquest of the Arabian peninsula, slaughtering thousands by the sword.

"Allah, the God of our Fathers!" Now, it is important to remember that the Islamic god, Allah, is in no way connected to the true God of the Bible. Allah is a pagan, Arabic deity. Allah is a false god. Allah is not the God of Judaism and Christianity; and Allah's prophet, Mohammed, was a false prophet who has led millions of people astray!

Obama deliberately caused the Arab Spring displacing millions causing the mass migration of ISLAM into Europe and the U.S.
The man is an enemy to the world!

This trickster tricked all who voted for him. And those who voted twice for him, he tricked twice.

He looks like a good Christian boy in this photo, doesn't he?

Radical change for the country.
He called it.