Coast Guard: Boat That Sank Was In Prohibited Area 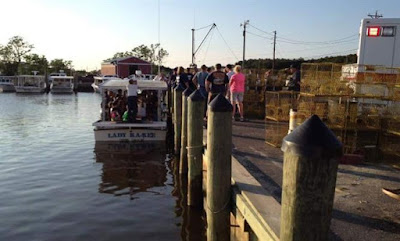 ANNAPOLIS (AP) -- A boat that hit something under water and dunked a group of fourth graders into the Chesapeake Bay had ventured into a prohibited area, a U.S. Coast Guard official said Thursday. The U.S. Navy warns of unexploded bombs in the vicinity.

Everyone on board was rescued after the 40-foot Chesapeake Bay Foundation vessel sank near the mouth of the bay Wednesday evening, in water less than 5 feet deep, just west of Bloodworth Island.

Those obstructions could have explosive consequences.

The Navy used the Bloodsworth Island Range for live-ordinance training from 1942 to 1995, according to the Naval Air Station Patuxent River, which warns against trespassing too close to shore.

A Coast Guard investigation may determine just what the vessel hit.

Foundation President William Baker wasn't sure if the boat entered restricted waters, but he said the foundation has led trips into the general area for years because it provides a sense of what the bay was like before the nation's largest estuary became seriously polluted.

The government should clean up Bloodsworth island after all the bombing they did there that poisoned the bay.

i remember as a child on deal island the bombing would rattle the house and the windows would shake. How on earth did the government not know that putting all that ordinance in the bay would seriously damage the ecosystem? As far as the captain of that boat, he should be held accountable. Every coast guard certified captain knows which areas are restricted. He is very lucky no one was injured.

Go figure a Bernie voter 1:03 can not spell or doesn't have the cognitive ability to recognize the name of a fictitious lake creature.
Please vote Trump.

The real damage done to the bay was north about 60 miles at the old Edgewood Arsenal where the government mad scientists brewed and tested the most lethal, potent nerve gases and exfoliant's known to man.
VX gas, mustard gas, Sarin and agent orange to name a few were all released in massive quantities not only to test the lethal effects, but also to test preventative measures to protect against the release of said gases in military combat vehicles as well as developing handling protocol and protective clothing at the proving grounds.
Not to mention all the explosives and chemical damage at bomb sites like Bloodsworth and the old Liberty ship near Kedges. Depleted uranium shells sit rusting on the bottom by the thousands.
No one can really ascertain the irreversable damage and poisoning the government has done to the bay, but left wing nuts are quick to forget about it and blame waterman and farmers.
The Chesapeake bay foundation sponsors the tours for children to spout off ( let the brainwashing begin) all the left wing climate B.S., the tours also give them the opportunity to preach about chicken farms, pig farms and grain farmers and how EVIL they are for running a business that provides food for society and affords them the ability to feed their families.
How ironic it is that the Chesapeake Bay Foundation tour boat gets sunk in a clearly marked OFF LIMITS UNEXPLODED ORDINANCE zone. The "we're special" Liberals just don't think rules apply to them. I am happy none of the children were seriously injured during their foray into liberal fantasyland.

makes you wonder where the so called "capt." got his license. It should be revoked until he can read and comprehend

5:17, totally agree. We all abide by the rules, and when piloting a bunch of 9 year olds, obeying the law should be paramount. This "captain" needs a refresher course!

Unexploded bombs everywhere out there,captain should lose his license.