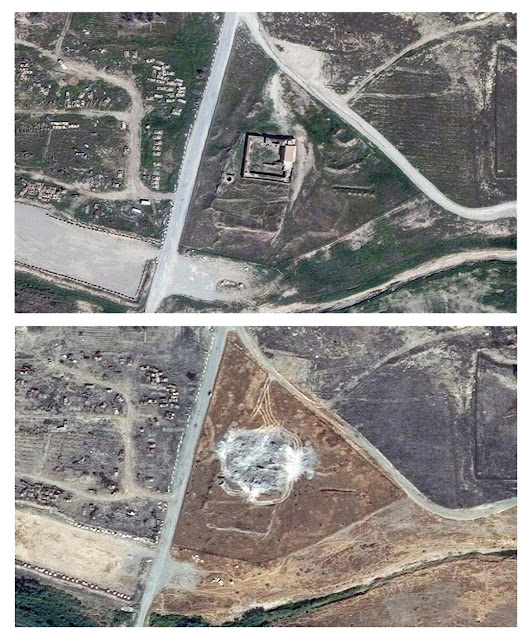 IRBIL, Iraq (AP) — Satellite photos obtained by The Associated Press confirm what church leaders and Middle East preservationists had feared: The oldest Christian monastery in Iraq has been reduced to a field of rubble, yet another victim of the Islamic State group’s relentless destruction of heritage sites it considers heretical.

St. Elijah’s Monastery stood as a place of worship for 1,400 years, including most recently for U.S. troops. In earlier millennia, generations of monks tucked candles in the niches, prayed in the chapel, worshipped at the altar. The Greek letters chi and rho, representing the first two letters of Christ’s name, were carved near the entrance.

This month, at the request of the AP, satellite imagery firm DigitalGlobe tasked a high resolution camera to grab photos of the site, and then pulled earlier images of the same spot.

Before it was razed, a partially restored, 27,000-square-foot stone and mortar building stood fortress-like on a hill above Mosul. Although the roof was largely missing, it had 26 distinctive rooms including a sanctuary and chapel. One month later photos show “that the stone walls have been literally pulverized,” said imagery analyst Stephen Wood, CEO of Allsource Analysis, who pinpointed the destruction between August and September 2014.

I for one am getting real sick of reading headlines like this. The question is, when are we as a society going to decide, what kind of society are we?

Well, 12:01, apparently we're becoming a society that allows the total destruction of our own historical monuments to appease a tiny percent of our own population. Soon we will lay on our backs and beg not to be killed by bands of trannys.

The kind that fights back against terrorism. If that offends you perhaps you should move.

Spanish Christians trashed the beautiful city of Tenochtitlan. They destroyed the temples killed the holy men, and carted away the gold.

A new planet has been discovered in our solar system and it is enormous.Don't laugh when events begin to coincide.Everything is interconnected & events appear to be speeding up.No one has to tell us that the bible is unfolding because we can see it for ourselves.

Sorry, 7:10.....the "new planet" has NOT been discovered. It has merely been inferred from gravitational effects, but no one has actually seen it and since, whatever the object is, it seems to be around 20 times further out in the solar system than Neptune.
Exciting science.
7:06....you are what these animals count on to help them. Two wrongs don't make a right, and further, comparing events separated by hundreds of years is a fools endeavor. Quit making excuses and trying to rationalize what the child rapists and violent killers do every day. When was the last time you heard of some Christians burning a mosque, raping the women, and enslaving/prostituting 12 year old girls?
Quick!! Run to Google!
Good luck.
Keep cheering.

This is a good plan for every mosque - the breeding ground for terrorists.

These entire religions are based on incidents separated by hundreds of years. You can't pick the raisins from the pudding 8:28. Eat the whole thing

Good try, 9:36, but your comment doesn't make sense.
What Christian act or acts, "separated by hundreds of years", are you
talking about?
Are you saying because someone did something atrocious in the name of God 3 or four centuries ago is justification for something atrocious TODAY?
I see you avoided the question I asked.
Give it a shot. I'll wait.

ISIS is a creation of Mossad and CIA.

Wonder how many children were sexually abused on that site.