Jack Markell :Why my state won't turn refugees away 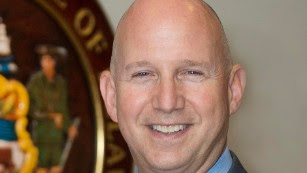 We know that those who forget their history are doomed to repeat it. Yet that sentiment has been lost in the politicized attempts to fight President Barack Obama's push to accept more Syrian refugees. Our state and national leaders would do well to remember a tragic incident from our past in which people fleeing from danger in their country were denied a compassionate response by ours.

In May, 1939, a few months before the German invasion of Poland and the start of World War II, nearly 1,000 German Jews approached South Florida aboard a ship called St. Louis. They had been denied entry to Cuba and hoped to receive sympathy from American leaders who knew of the severe discrimination they faced at home.

Instead, our government enforced the strict quotas in place at the time. Forced to return home, more than 500 were trapped by Germany's European conquests and about half of those died in the Holocaust.

with all due respect Jack, the jews were not running around trying to kill us

Its sad when these dumb politicians don't get it. This is 2015! Terrorist have stated they are going to attack the U.S. Delaware is the first state and if attacked first only the grace of God will help you, Jack. Total embarssment by this decision.

Where do I sign a petition to reject Markell's proposal.

To 239. We agree. jews were trying to open businesses and not killing Christians. Jack, does it have anything to do with you are a Democrat?

Is he really that out of touch with the current situation? Agreed, 2:39!

There is a big distinction between letting nearly "1,000 German Jews who approached South Florida" into the country and flying over to erbil iraq to pick up a bunch of people who you know nothing about--the inchoate state over there doesn't issue driver's licenses, ids or maintain any type of records

I only make enough money to care about the people in my immediate vicinity. I don't really care if Syrians live or die. Same for Jews of other nations. I care about our nation and I could care less about everyone else.

Stop listening to these idiotic sentimental arguments. The conservatives of this country have watched for far to long as the left destroys our nation. Its now time to get down to business. SO lets take pride in making the tough calls. That is what this is. Its the tough unpopular call.Deal with it.

The newest winner of the dumbest, most uninformed, most idiotic historical comparison is Jack Markell.
Would you liberal buffoons please stop?
Stop what, you ask?
Stop trying to convince the rest of us that the "Syrian refugees" that obama wants to force upon us (the Secret Service wouldn't let ANY of them within 500 yards of the President) are ANY different the Syrian "refugees" that killed so many French citizens.
"Thoroughly vetted", huh?
How? HOW????
The Syrian government won't even give us the time of day, but obama thinks they will give us birth records, background information, civil and criminal records?
Really?
I'm calling BS on ANOTHER obama lie.
Buy guns and ammo, people.
Its about to get real up in here.

how many can be housed at the Delaware state house

This is irresponsible legislation!! Politicians do not give American people enough credit for the ability to think for themselves.

We CAN NOT accept the responsbility of 100 of thousand refugees. Just the fact that Paris Terroristic attack was just 5 days ago. Five days ago!!!!!!

Any refugee can get a passport! There is no security, no proper screening in place to assure American safety from Terrorists!

In addition, these refugees come from 3rd world countries. There are diseases that are spread through human contact. We just had the "Ebola" drama play out in this country and all across the World!

Do we the people honestly think we can trust any Politician!!!!!! The answer is no.

I feel disgraced as a Delaware residence.

Amen 3:18 pm. I think the States who accept Refugees get Monies for doing such! So essentially they get bought!!! Money always talks in Politics. Screw American safety!!

It is a disgrace!

Thank God for Social Media today where we can voice our opinions and be heard!!

what a total idiot!

Hey Erkel or what ever your damned name is. We aren't talking about German Jews we are talking about Muslims. The Jews didn't try to take over the world like the Muslims are trying to. You can have your Muslims from Syria, but I have an idea you won't be opening your doors at your home to them.

3:45 Why do you feel disgraced? He is a liberal Democrat and likes to give out free stuff. I will bet they will all end up in Sussex County. They will receive free housing, medical benefits, food stamps, education, etc. funded by the taxpayers of Delaware. You are the ones that put Joe Biden in office. Suck it up cupcake.

Delmar will be the new outpost of isis and they can conduct raids on wicomico county at will.

He is doing what he is told to do by his bosses.

There is a hidden, shadow government in play.

Anonymous said...
Where do I sign a petition to reject Markell's proposal.

How about signing a petition to impeach his ass due to incompetence.

Anonymous said...
Just Imagine where Delaware would be today if Caesar Rodney had got on his horse and galloped off to Guatemala at the first hint of trouble

Anonymous said...
3:45 Why do you feel disgraced? He is a liberal Democrat and likes to give out free stuff. I will bet they will all end up in Sussex County. They will receive free housing, medical benefits, food stamps, education, etc. funded by the taxpayers of Delaware. You are the ones that put Joe Biden in office. Suck it up cupcake.

That's why the Mexican's migrated to Delaware. Because those Libtards make it easier for them to get all the free housing, welfare, EBT/Food stamps and medicaid they want. Nothing like living in a trailer for free in Slower Lower Delaware when you could be living in a windowless shack in Mexico.

Jack's been drinking the Kool-Aid again.

Is anyone else getting sick and tired of the liberal Democrats and liberal media trying to convince us that it's Ok to bring more and more Muslims in this Country. The Muslim population has increased threefold since Sept. 11, 2001 and that is by design.

Jews are not nuts! They are good people that wanted to come here and open businesses, and fight the Germans, not kill us! This is another Fuc&*% Liberal asshole!

This guy is an idiot bought and paid for by the Democratic Party.
I think this is a turning point that is way past due!!

4:44 Good point. Citizens in Delaware can obtain carry permits. They will easily slide over to the Maryland side an commit carnage. Slide over means walking across the street.

Yes those were different times and different people. No one knows how many of these refugees are being sent around the world by the terrorist muslims.

What none of you are saying and needs to be said is that the religion practiced DOES matter. If they are Muslims there is a greater risk they have been radicalized. Jack is right in the respect that the Jews should not have been turned away. Neither should Christians fleeing being murdered by Islamists. But here in the real world where most of us live Jack, how do you tell the difference. Don't forget people, the dunkin Donuts in Seaford, the Muslims running g that place fled the country the day before 9-11. Remember that morning? FBI was swarming g that place the morning of. Jack Markell is a fool, like Hussein Obama is a fools, like Neville Chamberlain was a fool, like Hillary and Bernie are fools.

That has to be the most idiotic comparison that has ever been made. He should be ashamed of himself and immediately apologize for such asinine comments.

FDR refused to allow Jews into the USA Markell you fool ..the ships were not allowed to dock--moron ..this idiot must have stock in gun and ammo companies

Gov. Jack Markell needs to change his mind or be voted out of office ASAP.

Had the germans resisted, there wouldn't have been a holocaust. Sure some would have died in the face of resistance, but they could have overcome the guns pointed at them. They couldn't shoot them all.
But they didn't resist. Well we're RESISTING & anyone with any sense would as well!!

Okay Markell, can some of the Syrian refugees come live at your house?