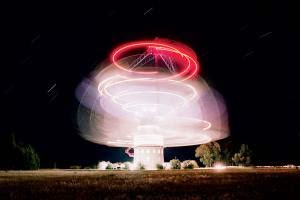 Mysterious radio wave flashes from far outside the galaxy are proving tough for astronomers to explain. Is it pulsars? A spy satellite? Or perhaps an alien message?

Bursts of radio waves flashing across the sky seem to follow a mathematical pattern. If the pattern is real, either some strange celestial physics is going on, or the bursts are artificial, produced by human – or alien – technology.

Telescopes have been picking up so-called fast radio bursts (FRBs) since 2001. They last just a few milliseconds and erupt with about as much energy as the sun releases in a month. Ten have been detected so far, most recently in 2014, when the Parkes Telescope in New South Wales, Australia, caught a burst in action for the first time. The others were found by sifting through data after the bursts had arrived at Earth.

No one knows what causes them, but the brevity of the bursts means their source has to be small – hundreds of kilometres across at most – so they can't be from ordinary stars. And they seem to come from far outside the galaxy.

The weird part is that they all fit a pattern that doesn't match what we know about cosmic physics.

These radio signals are going to keep on being " "... very, very hard to explain" " as long as astronomers, cosmologists and astrophysicists cling to their "gravity powered big bang model". Everything that's being learned by spacecraft and terrestrial observation is a surprised to them, it's anomalous. So what do they do.., they postulate and theorize and pile conjecture upon conjecture to garner an explanation.
The fact is, their gravity powered universe isn't working and it's not going to work, they're wrong, dead wrong. The sun is not a contained nuclear fusion explosion. There is no dark energy or dark matter or neutron stars or black holes much less any of the other BS the current celestial academics like Brian Cox or Neil deGrasse Tyson or Stephen Hawking spout.
It's only a matter of time until they all have to accept that the "Electric Universe" is the true nature of the space.
It's beautifully simple., there is no reason to postulate fantasy to explain the evidence., any observation in the heavens can be scaled down and duplicated in a laboratory [in fact many already have been].
I urge anyone who is truly interested in astronomy and space exploration to do a little research. The Thunderbolts Project, Dr. Wallace Thornhill, Donald Scott, Phd & MIT professor, David Talbott are only a few of the names you can begin with. YouTube has some great vids on the subject. I feel quite certain that the info you come away with will more then change your mind about the current "standard model" paradigm. The sun IS NOT a nuclear explosion it's a lightbulb.

my cosmologist wouldn't know a quasar from a cadillac.

God created every living thing in the entire universe.Not to over simplify anything,but he put everything precisely where he wanted it.The desire to contact other species should be expected,for them as well as us.