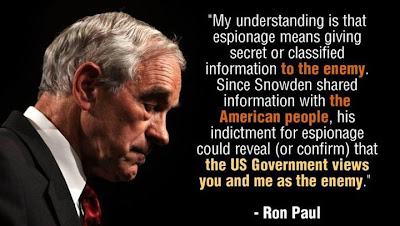 By making it public is the same as giving it to the enemy.

anonymous 9:25, So, Mr. Liberal, what your saying is, we, (Americans) are the enemy. Well, you certainly have the right to your opinion.

9:25 Using your logic, Paul Revere was a traitor for alerting the public (the enemy) that the British were coming...Jeez

Ron Paul hit the nail on the head. And 9:31 did too. And Snowden didn't do anything, not even a fraction of what "Hanoi Jane" did in Vietnam.

Since when does the American public live in China, or Russia, or where ever he is going next. This man has four US govt. top secret computers with him (stolen property). He has been sleeping in our enemies bed. You can be sure that everything on those computers has been downloaded by our enemies while he was sleeping (or drugged), and that is giving him the benefit of the doubt that he would not share it with them willingly. There is a reason these countries want nothing more to do with him...they have no more use for him. The way to make the American people aware of the things he was concerned about, would have been to stay here, go to 60 Minutes, or Fox News, or even Mr. Paul, but what he is doing is treason. His family has even said that. Who is bank rolling all this?
Answer that, and you may have the answer as to why he is where he is.

There's a big difference in saying the enemy is coming compared to public posting of secrets.

snowden did proove one thing. we as a nation have become the laughing stock of the world. we used to be respected, now we are mocked

9:28 AM...No, what is being said is the enemy can read the printed information the same as the American can read it.

Thats funny 10:10 I think the man is a hero. How many people would risk there lives to do what is right for the American people. Your goverment is breaking the law and they don't trust you and your just fine with that. You my friend are a sheep.

Snowden is a traitor and belongs on trial for espionage along with Assange, Pvt Bradle.

"The Tuskegee syphilis experiment was an infamous clinical study conducted between 1932 and 1972 by the U.S. Public Health Service to study the natural progression of untreated syphilis in rural African American men who thought they were receiving free health care from the U.S. government."

How would you propose that a guy like Edward Snowden have handled this bit of information?.... Should he trust the US press to get the word out that the US government is killing its own people? How could he be sure that the press wouldn't turn him in as has been done by the press to whistle blowers before?

if you seek out the 4th amendment of the bill of rights, it states that -
"The right of the people to be secure in their persons, houses, papers, and effects, against unreasonable searches and seizures, shall not be violated, and no Warrants shall issue, but upon probable cause, supported by Oath or affirmation, and particularly describing the place to be searched, and the persons or things to be seized."

well my friend, i think we were violated.

the information the government is gathering is to find terroristic activity. in other words, illegal behavior. however, that means the government HAS TO gather information that does not have any "probable cause", as stated by the amendment. so clearly this is shredding the 4th amendment (as well as the first amendment - arguably - as speaking out against the tyranny can now be considered treason).

1112, bad analogy. The Tuskegee Experiments story was broken to the America public through the American press. Back to the drawing board for you. See, this is what happens when you only read the cover of the book and look at a few pages before forming an opinion.

snowden is a hero. the government is trying very hard to totally intimidate him so other whistleblowers will be silenced. if you can't see what is happening; you are truly blind and clueless.
our current government is our of control and each day does another treasonous act. we as citizens don't know the half of it. we probably never will. this much I do know; never trust the government. our founding fathers and great leaders throughout history warned us of this. be aware; be very aware.

Foreign Agents infiltrate US. secrete places all the time. Hopefully this one receives his punishment.

11:40 Hardly a bad analogy since you misinterpreted my intent. Follow along (if you can)

Your government has shone a past propensity to kill its own citizens (I used Tuskegee as just one example)You wrongly assume that the journalistic landscape is the same as it was between the years 1932-1972 and you seem to subscribe to the notion that the governmental landscape has remained unchanged as well.

My point is that you have a government that will kill its citizens if it wants to. And in this day and age it can reach out and touch you in many more ways than it could in the past. It can destroy you financially, plant electronic evidence, etc. So, the game has changed considerably from that of the past.

Now if you are a person who has first hand knowledge that the US government is tapping everyone's electronic records, who can you rely upon if you feel the need to blow the whistle? The press? (they were being tapped) The Congress? (apparently they were being tapped as well)Who can you trust when everyone is being watched??

You are also naive to believe everything that you have been spoon fed by the press. I'll bet you believe that it is perfectly plausible that Mohammed Atta's passport was found, intact, on the streets of New York after he had just driven a jet liner full of fuel into the world trade centers? People like you believe anything and fail to ask questions regarding the obvious.

I'm glad Snowden did what he did, but he clearly broke the law and had this been done under the Bush Administration (which started these information-gathering schemes) a lot of you same people would be calling for his head.

The NSA is barred, by (don't laugh) law from using their resources and methods in the United States. They are also, by law, completely protected from being prosecuted for breaking that law. Thats called "incentive". The CIA is also prohibited -- by law, for what THAT'S worth to these slimeballs) BOTH have been caught red-handed doing EXACTLY THAT. Snowden exposed THEIR crime and now HE is the criminal??! Don't fall for the sheeple hype. And PLEASE -- stop cheeering for this "we have to watch ALL of you people ALL of the time in EVERY WAY" so we can "protect" you. Its making you look like you're scared of your own shadow. And very very stupid.

Anonymous said...
Foreign Agents infiltrate US. secrete places all the time. Hopefully this one receives his punishment.

What have you got to say about the Muslim Brotherhood infiltrating the White House and Administration? I guess that is Ok because your hero Obama is doing it! Hopefully Obama receives his punishment along with all of his sheeple. Obama doesn't scare me, you people that voted for him scare me. Especially voting for him the second time.

Anonymous said...
I'm glad Snowden did what he did, but he clearly broke the law and had this been done under the Bush Administration (which started these information-gathering schemes) a lot of you same people would be calling for his head.

Please enlighten us with your broad knowledge and tell us what law he broke.

Joe I am shocked by all the liberal losers that read your blog. If corruption slapped them in their face they would be to stupid to understand it and they would thank Obama for slapping them.

But what are we to do? RP will be too old to run in 2016.I honestly don't care as much for his sons viewpoints as I do for his.

obama is PRAISED for bugging the entire nation (plus some).