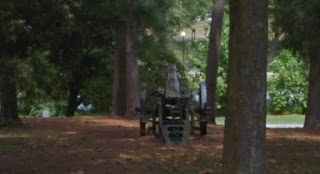 What ever happened to the Cannon in the park? It's gone.

Jake sold it for scrap to pay for the Folk Festival, maybe?

Scared too many millennium's!

It’s been scrapped because it was a racist symbol. Melted down and used for roundabouts and bike lanes

My my my, it must of offended someone!!!

it was scary, had to remove

I hope refurbished is the answer it's a part of the park history and as long as I can remember our son and I'm sure many other families have pictures of their children sitting on the cannon. Time was there used to be bands and picnics and along time ago swimming in the park. We need to preserve the cannon and the grand stand.

It was aimed at the Wi Hi Middle School Auditorium to keep the kids straight.Most people didn't know that.

I'm 64 years old and that cannon was there when I was a kid. You know...before God invented dirt.

It was taken away to be refurbished and new wheels constructed. It will return to the War Memorial by Pep Boys.

More of Jake Day's Bull$hit! Claims it's being refurbished and then it's going on Rt. 13 on that little piece of land across from Pep Boys.

Jake Day was defending his actions on FB recently.

It's a reminder of our racist past!
Too many feelings hurt.
It was taken away for scrap.

It was removed because it was intimidating liberal and snowflakes that it just might attack and kill someone, cuz we all know guns, and or a cannon, go out and kill on their own.

What kind of magazines does it read? There’s been a lot of attention on guns and magazines lately.

LOL I love all these answers.

Anonymous said...
I hope refurbished is the answer it's a part of the park history and as long as I can remember our son and I'm sure many other families have pictures of their children sitting on the cannon. Time was there used to be bands and picnics and along time ago swimming in the park. We need to preserve the cannon and the grand stand.

It's not going back to the park.

its sad that its being moved, but the war memorial is probably a better place for it. It goes along with war and memorial. i will be sad going to that area and not seeing the cannon but where its going, it will be seen by all passer-bys going up and down rt 13. It does not matter to me as long as it has not been destroyed.

Didn't have a permit.

understand they got $.10 lb at the recyclers.

I hope its just being refurbished.

Again, can someone please name all the great things Jake Day has done for Salisbury? And feel free to add to this "Failed" list.

From Jake Day's FB page. Looks like he is fanning the flames of hatred towards the County Executive and Wicomico County.

Jacob Day said... It was an honor to join you two! Always fun. Call on me anytime!

Len Foxwell said... Always a pleasure to join The Detail and to catch up with my friend, Jacob Day. Stay on this story, Ryan Miner - much left to answer.
-------

Ryan Miner
19 hrs ·
Tonight will be one of the most important shows in the history of the podcast.

Join Jacob Day and Len Foxwell to discuss the National Folk Festival, the infamous Bob Culver letter and what’s going on in Salisbury.

Listen in, live at 9 tonight.

Len Foxwell said... Ryan Miner: Thank you so much for shedding additional light on what happened in those days leading up to the Folk Festival. Tonight is going to be one of those shows that gets rehashed for years to come.
Liked by: Jacob Day, Clayton Mitchell, Sr