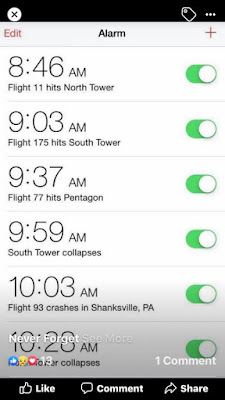 How quickly we forget .... 2008 just 7 years after the worst attack ever on America's homeland and its values, barack hussein obama a muslim, was elected president of the United States. Now we have four in congress intent on carrying out his destructive agenda for our great country. Come on people, wake up, this is really happening.

9:08- Everything you stated, we already know. Also, We elected Trump. We did not elect "the squad." You need to wake up and find the right audience. You're preaching to the choir.

Saudi Arabia sponsored them and we still buy oil from them, yet we are the largest oil producer in the world. We are a F****** up country!

You think the Muslims were the masterminds of such a military precise coordinated attack? That’s laughable. You’re still sleep buddy...research “Project for a New American Century” Published in Sept. of 2000

Girdletree, electing trump was but one action being taken against this underground takeover of our country, and he is fighting this alone with virtually no help from congress. The sanctuary states (including Maryland) and cities (Salisbury soon) along with four muslim congress people are working against him and the patriotic citizens trying to save us. By the way, I'm just throwing this usless information out there to let people like you know that you're not the only one paying attention to politics.

WE WILL NEVER FORGET

12:00- You're still doing it!! Stop being a pompous ass, and know you're audience. I promise everyone here already knows whatever you think we don't and much more! Save your "lessons" for someone who trolls otherwise. I really don't care to know if you're interested in politics. Why do you think I, or anyone else would. Weird. I needed to comment that state we've not forgotten anything, as you say we all have, insinuating that we're all much dumber than you, and that you felt you needed to state the most well known current events, as we're all ignorant about it. Come on, Man!

Remember, "Some people did something, that is all". Congresswoman Omar.

@ 12:00 I do not see any evidence of your knowledge of politics. You don't get elected President of the United States with virtually no support. Hello? Many Republican Congressman support Trump, as the democrats are now embracing socialism to such an extreme.

Then, there are his rallies! His last one set record attendance, previously set by Elton John! He is not virtually alone!

No, your knowledge of politics seems pretty thin. I think you wanted to, like 9:08 stated, preach. Somehow you thought you were successfully being introspective, and that we've all just sat on our asses, are stupid, and helplessly just watch things happen.

That is just plain ignorance, and someone called you on it. Instead of moving on with your effort to still portray being superior in intellectual political knowledge, you only proved the very arrogance you assumed us common folk would otherwise think was intelligence.

You tried to wag your finger at all of Joe's readers. That was your first mistake today. Maybe you need to wake up and remember that a lot of us know a lot more than you. You should be okay with that. I am.

Girdletree, I guess you don't know it, but this blog is not just read by people on the Eastern Shore, it is nation wide now. The squad "was" elected, just not by the voters on Delmarva. My comments are not targeted at one particular region of this country and I stand by my statement that people have forgotten what happened 18 years ago, other wise barack hussein obama and the 4 muslims would not have been elected. And obama did get plenty of votes from Worcester county

9:30- Once again, you state what every one already knows! Again, you made it clear you think everyone else is dumber than you. Do you see all the "we never forget" comments on this thread? Man alive, your condescension is thick and undeserving. I think it's us that you need to pay attention to, not vice versa.

Boys, boys, calm down. Nobody cares what either of you think. You sound like 5 year olds. Both of you are full of yourselves. Neither of you speak for anybody else, and certainly not me. Quit pretending you do.

Someone forgot, as I stated before