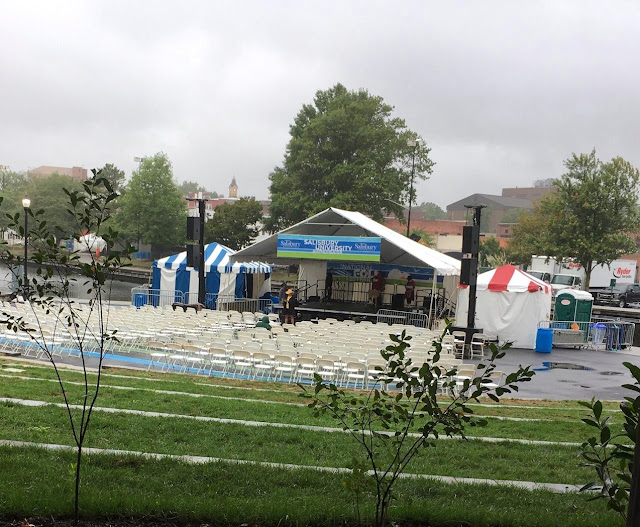 Just one of the tens of thousands spectators at the highly successful Salisbury National Joke Festival. Pitiful, pitiful, pitiful.
at 9/16/2018 06:00:00 AM

If questioning spending several million dollars, of taxpayers money, to entertain a few thousand people, at most, makes one a negative person, I’m guilty.

Few, if any of the music groups will be back next year, and some may sue the city and Day for misrepresentation and fraud.

They have to remove the amphitheatre after since dp&l still has that underground wiring. All that money, next to no use & it has to be removed! They can really spend my money. I feel bad for the folks who worked so hard...

Why 2:56? It's not like they lost anything. They were paid. The vendors were the losers. Paid for space and didn't make any money. I'm not sure how they worked it but it used to be when we had carnival concessions we paid by the foot for a space, then a fee for insurance and trash pickup.

They wasted a lot of money on potable toilets but mostly the poor entertainment from who knows where.

I wonder if DAy will pay these acts , he doesn't pay for contractors.

Vendors lost EVERYTHING, unless they listened to everyone saying no one will come and planned accordingly!

I think that's something being very under reported. The amphitheatre was built without DPL giving permission and will cost tax payers who knows how much to tear up and rebuild. It's obviously being covered up.
And since it has to be rebuilt, move it. I saw a rear end collision right in front of it on Rt. 13 as someone slowed down to see what was going on and got plowed into from behind.

Anyone a fan of NBC's 'Parks and Rec'? This reminds me of Ben
Wyatt's Ice Town. The difference is the character of Ben is a likable person, but I digress.

I met Jake at a restaurant on Route 12 in Salisbury. He was there to promote local restaurants, but didn't want to order or eat anything until the owner said it was free. He then ordered the crab cake. What a way to support restaurants, than with a free meal. Good work, Jakie Boy!

Jake was the most smug POS, mayor or not, that I have ever had the displeasure of telling about what an asshole I just met! I feel I need to make this point at the time of this utter failure! This happened just several months ago.

Everything he does, it's not for you, Salisbury, or any other reason other than his own need to prove his self worth to a more successful father. A Napoleon complex, self justified again, by his kinda successful daddy, but failing at every decision. Maybe it's youth, but I don't think so. It's ego.

Jake, you are the most undeserving, and also somehow lacking the least amount of self awareness, I've ever personally witnessed. You have never showed any concern with the hierarchy of needs of your constituents. That's plain basic ignorance as a mayor. Your leadership is a joke.

Whew 7:35. That's harsh but I have to say you are right. Especially that last paragraph. My feelings and experience are with you. Oh wait a minute. He does care about the millenials and the beer gardens and bars. There are more serious reasons why I would not vote for him the next time around.

If you notice the banner on the stage says Salisbury University on it. Now why the Hell do State taxpayers and students have to pay for that bullshit. Yes the students pay for everything. It's one of those enormous fees that is included in the bill for full-time students.

Do you not get outside? It was nasty out!

Where's the 300K (then downgraded to 80K) we were supposed to see? I'll just bet all the local business put out by this hootenanny are pissed beyond belief. City Hall promised them a load of crap only to have this be the final outcome. Anyone shocked and amazed should have their heads examined because this event was doomed from the beginning.

5:45PM the National Folk Festival will pay the acts regardless of the flop. That's why they asked for a guarantee up front from the boy mayor. They would never let acts even sign a contract without all the expenses and retainers being paid in advance. Day can't skip on them.

Because Salisbury University is part of the good ole boys around here. Have to give them free advertising you know. They tell Salisbury how high to jump. Money talks.

@ September 9 at 4:39 PM. It's called Job security. I'm betting they knew all along about it needing to be tore up again.

@ September 9 at 4:39 PM. It's called job security. I'm betting they knew all along that it would have to be removed again. Find the right Salisbury employee and ask them.

I live is Salisbury City limits and I really don’t like going downtown! I feel uncomfortable and there is noting to draw! At night is another whole story with lighting that looks like flash lights. We need the high sodium light like Baltimore used to light it up!

The new President at SU should’ve stayed away from this sinking ship. No need for the kids to be involved in all the rip roaring bust. Shame on Eschbach for even promoting this nonsense but she did.