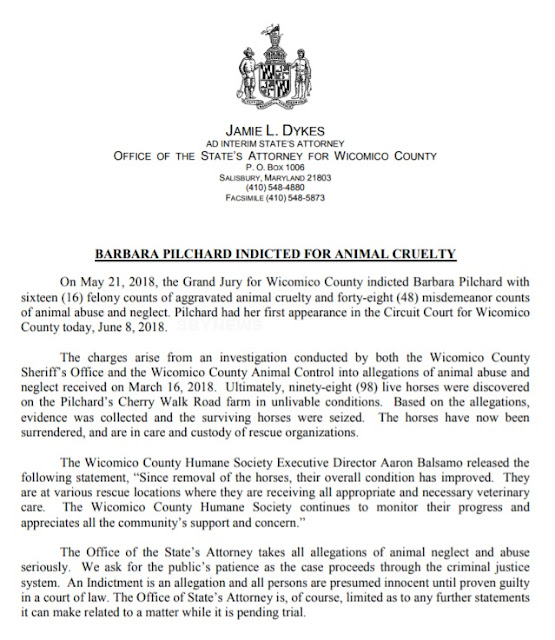 What about the husband and daughter? No culpability?

This is NOTHING new! Anybody in or around that area knows!

So...something goes wrong at a farm and you liberals want someone to be punished. I guess you'll want the same when a mishap cause half a flock of chickens to smother too......

Horses are people just like dogs. They are not livestock or raised for food.

Everyone calm down, it won't amount to a hill of beans! Money talks and B.S. walks....good ole' boys will sweep it away just wait and see.

THAT IS AN IDIOTIC RESPONSE TO THE HORROR THOSE ANIMALS WENT THROUGH.

11:23 well yeah genius, when someone isn't taking care of their animals they should be held accountable. How's your corn cob pipe coming along?

They eat them in Europe.

This whole thing is wrong. The neglect was wrong BUT also responsible are those in the horse world who knew after being diagnosed with cancer the lady was experiencing financial hardship. She put out a call via GoFundMe to help buy feed and hay and got very little to no donations. The horse world turned their backs on her but did they ever show up when the cameras were rolling. They should be ashamed. Responsibility also lies with the what is becoming apparent the useless county department known as the Wicomico County Animal Control, This just like the puppy mill situation down in Eden would NEVER have gotten so bad if the people who work for that department did their jobs. They just like Eden were called numerous times about the condition of the horses and did nothing. I have no idea who is running that county but it is a stain on the whole state of Maryland which has made strides against animal abuse and neglect.

1123 you mouth breathing tard you have been sniffing to much chicken dust ole boy. You must be from Willards and grew up under the power lines. If you starve livestock to death it is a crime. If you sit outside the chicken house blowing a bugle so the chickens smother you are a criminal. You do not feed and water your chickens you are in violation of the law. You still married to your sister ?

The lady was sick both physically and mentally. She is a classic hoarder. I know many that tried buying horses from her and she turned the offers down. Then it just got out of control. The suffering she and those animals felt should never be tolerated. Cancer is a cruel sickness. Starvation is just as cruel. Dehydration is pure torture. The whole thing is sad on many levels. The Sheriff's Office screwed the pooch on this one.

4:39 - you are so right! It is a real shame. If the problem had not been observed by the media who "threatened" a story, things would still be as they were.

AND yes, good old boys will sweep under the carpet. Anybody remember Pilchard Brothers?

4:39 You are completely correct!
Humane Society Director , at the time of the
Puppy Mill incident , was David Fitzgearld ,who
now holds A Wicomico Cty . Position!! He
told the neighbor, who complained about the dogs to him ,
that he'd been there and the people were in compliance
with the Law! That was approximately One Year Before
the Puppy Mill was raided !!!!! Mr. Fitzgearld should be
made to live and breathe in the conditions those animals
lived in . I have no respect for Our County for hiring
him and keeping him as an employee , or for Him!

By the way , I've never heard the "Puppy Mill"
case ever went to Court. What Happened there? Was it
"swept under the rug" after all the Anger from the Public
settled down. That happened over a year ago last April.
I had heard the man was in a Nursing Home and the women
was ill .

The only ones who should be on trial for this and the Eden puppy mill case is the county and it's complete failure to act before things got so bad.

I don't think most people are aware, That H.S. runs
itself basically !!!! They have a Board of Directors you can
complain to ====the Cty. gives them so much TAX Payers money to help
run the place ( over $200,000 per yr.) ===they get money from the City and DelMar.and They do what the Hell they want and the County holds
No responsibility or accountability d!!
It will never change unless people are made accountable for
their actions or non/actions! People should
be demanding the County to be in charge of it !

There are lots of things that should have happened and it should have started with the owner's family. This isn't the first time she has been in trouble for hoarding animals. When her health took a dive she should have rehomed every horse on her property even if she made no money by doing so. If she refused, her family should have and could have made her do it. It's not the fault of the horse community because they wouldn't fund her! There isn't enough money to fix this woman's horrific mess and keep her in the horse business. Cancer or not...she deserves the karma coming her way. That goes for her family too! SHAME!

You are so very right.

Who or what were the Pilchard brothers