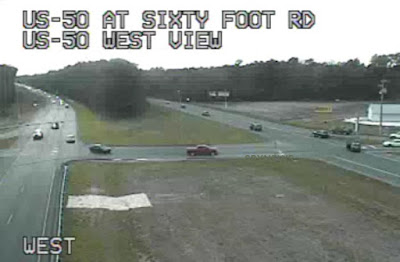 They cleared the trees so people can see traffic YRT IDIOT drivers are STILL pulling out into traffic put a DAM LIGHT THERE.

A light here would just make traffic to OC even worse. Close off the median! The less than 1,500 people of Pittsville have proven they can't drive and should lose their rt 50 crossing privilege.

What is it with that intersection?! People not paying attention? Not estimating speed of oncoming traffic? I assisted 2 injured drivers one Saturday morning. The driver at fault said they didn't see the driver heading eastbound. WTF? It was a vehicle that had automatic running lights.
I've almost hit at least a dozen drivers crossing there. They take their good old sweet time like they're driving a lawnmower.
Darwinism at work. It's a shame they risk other drivers.
You can't fix stupid.

Closure is not an option according to SHA. A light is badly needed.

Actually it is not Pittsville residents but Delaware residents using Gumboro Rd that work in Salisbury.

Too insignificant to create an overpass, too inconvenient to place a traffic light, too dangerous not to do anything. What's it going to be?

A traffic light for the North and West bound traffic is what is needed, one for East bound rt50 is not needed!!

7:11
Maybe do a little more research. Many people that use that intersection are people that are heading into Delaware. Most local use one of the 2 other exits instead.

Who ever designed the intersections on Route 50 should lose their job. Is there any intersections that you go straight when crossing? Seems like they are all on an angle.

Who ever runs SHA needs to be Fired.

They won't put a light there bc it's population control.

Maybe the new town cop will have some ideas! That's right!

The problem is the people are not paying attention nor obeying the rules of the road. Lights won’t fix that!

Make them go down and U turn like SHA did on 50W Hebron and Rockawalkin.

The cross over's are the cause...Close them all and build a bridge

It's not the intersection that's the problem, it's the fact that people are in too much of a hurry and think the world will just wait for them while they cross over 50. A light is just going to cause more congestion during the summer months.

Crossed though that intersection many times. Every time it is obvious why it is dangerous. NONE of the commenters have gotten it right. Many higher speed highways have the same problem with crossovers. Because of the speed of the cars on the highway being crossed, many of those collisions are fatal. People crossing the highway are not stupid, acting dangerously, or on a suicide mission. They looked, saw no car, and pulled out directly in front of a car going 60-70 MPH. If you actually use that intersection long enough, you will realize how close you come to being a statistic. You will go "WOW, I looked and never saw that car." It is not the SHA's fault. It is just really easy to miss seeing a car that is blocked from view by a part of the roof supports of the car (when the car is far enough away to be totally blocked from view when you look up the highway), and at that moment the driver makes the decision to cross the highway. And just like that, at 60-70 MPH, that unseen car is barreling into you broadside. All the ones crossing the highway looked (they didn't have death wishes), and all of them wonder where that car came from that hit them (if they live). The only way to safely cross that intersection is to use the common tactic of turning slightly towards traffic so that the roof support can not block your view, at all, of the approaching high speed traffic. It is complacency and not taking the time to check, and double check, what you think you are seeing. If you can't see the whole highway when you look, there can always be a car that you don't see that is coming at you at a high rate of speed. For all you critics of the drivers and the SHA, quit being so judgemental, and go cross that intersection yourself. Look at what I have just explained to you, first hand. And then you will realize, "OMG, I could have just gotten killed, if I pulled out when I THOUGHT it was clear."

What's a "DAM LIGHT?" Is that one that stops the water?

Stupid is not knowing the reason for the accidents. You qualify. The problem is not the drivers (well not totally) it's that slight bend in route 50 Eastbound about 1/5 mile up the highway from that intersection, that places cars in the blind spot of the right windshield roof support. You are the stupid one, if you think all the stupid drivers go to that intersection to get killed. The statistics point to a flaw in the design of the intersection, that requires the driver to cross when there is a natural block to their view of the traveled portion of the highway with oncoming high speed traffic. The driver you assisted was telling the truth. They did not see the car coming, because it was blocked from their view, when they looked. It's why drivers pull out in front of your dumb ass all the time, Mr know-it-all.

Lil Blockhead Powell will be directing traffic here soon. They will place lighted beacons on his mug and be able to see from West O.C. and Salisbury.

3:55. It's better to keep ones mouth shut and be thought a fool, than to open it and remove all doubt. I've crossed there many times and can see just fine. I look out the SIDE window like you're supposed to...not the windshield. On what farm did you learn how to drive? How can you look through your windshield when the intersection is perpendicular. (That's 90 degrees for you)
And...I look several times to judge the speed of the oncoming traffic.
And after 50 plus years, I'm accident free. Never even close when I'm crossing traffic that I know the other drivers might be traveling at 70 + mph. The human mind can perform trig and calculus automatically and faster than a computer. Well, most of them can. And calculus is the math that helps us to determine rates of change (speed, acceleration, deceleration) based on an instantaneous observation - I.e. Looking left or right for a few seconds.
So, maybe you can fix stupid after all.
Try it sometime. It might save your life.

When cars on 50 are doing 10, 15 and 20 mph over the limit, it's near impossible for a driver to accurately judge that vehicle's speed when preparing to cross. Before they know it, the 50 car is on them.

It is not just De drivers causing these accidents. If you really want to see what is happening at this intersection, pull up the SHA site and watch for about 10-15 minutes. It will truly enlighten you. Barely anyone comes to a complete stop whilst in the median. It is crazy! I have seen concrete trucks, school buses, cars etc. How can you Gage anything when you are rolling thru the intersection???

There are several problems with this intersection. That is why I don't use it. The one at Main Street ext is a little better but not much. Think about it. Most of the intersections in this area are not straight. The one at Main Street, Sixty Foot and even Woodyard Road are all at an angle. Judging the speed of a car can be difficult. It also places cars in a blind spot in some vehicles. Some vehicles have a wider piece of metal between the windshield and the passengers side window. (sorry I don't know the name of the part).

Of all the intersections East of Walston Switch this is the busiest one. Maybe if they were not at an angle it would be better. I will never understand why they were all built that way.

6:01 It's called the A pillar. It is a poorly designed intersection and with poor drivers that don't look down the highway until they get to the stop sign and as 1:52 pointed out don't come to a complete stop it all adds up to an accident waiting to happen. Just hope I am not the one some idiot pulls out in front of. We worry about a few idiots with guns when we allow millions of idiots with a more lethal weapon on the road every day.

"You can see just fine, huh"? If you have no blind spots on your car, you must be driving a horse and buggy with no top. You are an old codger that THINKS he knows it all. You'll be one of the dead ones at that intersection someday, if you think you can see everything coming at you through the side window at that intersection. Yep, the old sayings still goes...no one can fix stupid, or willful ignorance.

No driving on the farm for me, rather I have been a licensed professional (CDL) driver for the last 47 years. You sound like one of those stupid 4-wheelers (trucker language) that professional drivers have to contend with every day. You don't even know that you have an incomplete view of the oncoming traffic at that intersection. It's a wonder you haven't become a statistic, or if you even know the intersection that is being discussed.

I'm afraid what you learned in school over 1/2 century ago wasn't calculus. You give yourself a lot more credit for being intelligent, than you deserve.