Remove the Ray Lewis statue in front of Ravens stadium 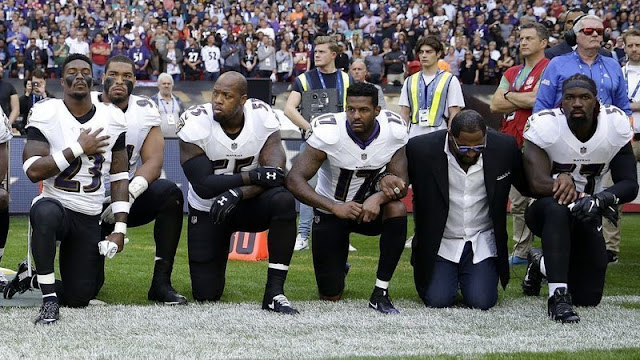 I want the Ray Lewis statue at Ravens Stadium removed because of his refusal to stand during the National Anthem. That song honors our country and our veterans who fought for it. To kneel during it is disrespectful, regardless of what you are protesting. I will not stand for that kind of disrespect towards our country, especially from a legend such as Ray Lewis. You stand for the National Anthem as a salute to those who can't stand because they fought for this land.

If they are removing confederate statues, then they can take that p.o.s. down. And to think they had security protecting it.

I detest this kneeling but cut Lewis some slack.He has taken unpopular stands such as Baltimore men taking personal responsibility for themselves. as he debated a whiny liberal black sport commentator on a Facebook video, a Lewis was called a "rat coon" by a black critic.

What would happen in Russia if they showed this kind of disrespect??

Why are these players so against our vets?

The Ravens can pay to move it too!

Cut a MURDERER slack? Oh hell NO and go wash your mouth out with soap for even thinking that. Bet you hadn't heard that phrase for years either.

And that's enough to have a statue in his honor??.

24 hour police guard on R Lewis statue but police allowed protesters to tear down statues around the state.

So you’re saying that there hasn’t been any acts of police brutality or social injustices for people of color ?

Literally none of these players said that they were against vets.

Is that what you want? NKVD coming and scooping people up under the cover of night for disagreeing? What an idiotic comment. We are not Russia. You know the flag truly only means something to those who have sacrificed for it. Those fortunate enough to have not given life, limb, and family for the flag don't cling so blindly to such an old superstition. I also disagree with what they are protesting but they are allowed to protest how they see fit. Just as you are allowed to turn off the NFL. Of course without that what other way will you escape your miserable reality? Hmm...perhaps comments on this website lmao!

"So you’re saying that there hasn’t been any acts of police brutality or social injustices for people of color ?"

Are you suggesting that whites don't have similar experiences? Why is your concern limited to 'people of color'?

And what, exactly, is a 'social injustice'?

Wow, who's the snowflake now?

Unarmed black man shot for running from the police in Salt Lake City Utah. Shot in the back. At 50 years old. He was running away from them. Is the cop handicapped and incapable of pursuit? Incapable of firing a taser?

As a vet, I don't feel "disrespected".

I swore to defend all rights. Especially the unpopular ones that most people disagree with. Those ones need protected the most.

What does make me feel disrespected is when you drag MY service into YOUR argument and get offended on MY behalf.

Veterans are fucking tired of being brought out like dancing poodles for the GOP and conservatives of this nation to further their own selfish, backwards, and archaic ideas.

That's disrespectful to us.

We are living, breathing people with our own thoughts and ideologies.

We swore to uphold the Constitution. Part of that Constitution is these players doing exactly what they are allowed to do - peacefully protest.

Showing 100% reverence to a nation or symbol of the nation is NOT patriotism, it's nationalism.

And history has shown that nationalism is a very dangerous idea.

F the whole NFL organization. We are all done with the charades and want to watch sports instead of political and religious pandering, which we have to put up with all week long. Past that, there's Nascar, baseball, basketball, soccer and other sports that are true athletic competition, not a bunch of trying putzheads whining about inane "Social Justice", which there is no such thing. There is "Justice", or lack thereof.

Get used to it.

STFU and play ball. Maybe we will be back when you decide to do that.

Thats tragic. Terrible action taken by the cop. But it is Not the Flags fault or Anthem fault. So why disrespecting the Flag and Anthem by kneeling? How many innocent blacks have been murdered in Chicago last weekend? Who is kneeling for them?

Anonymous said...
I detest this kneeling but cut Lewis some slack.He has taken unpopular stands such as Baltimore men taking personal responsibility for themselves. as he debated a whiny liberal black sport commentator on a Facebook video, a Lewis was called a "rat coon" by a black critic.

Speaking of "cutting" didn't Ray Ray do some cutting in Atlanta? That's right, he MURDERED 2 people.

STFU!! Ray Lewis doesn't deserve to breathe another ounce of oxygen and neither do you!!!

Deface HIS monument like others have defaced civil war monuments.

I see they had nothing to say about that it only when they can use a situation to continue their rise above white people cause they are so oppressed that Barack Obama, Jay z , beyonce, and so many other blacks are struggling and had no options......stfu and get a job.

Thank you. Well said & thank you for your service.

nobody gives 2 squirts of duck poo about what you or I or anybody else wants, get over it.

The media cherry picks story's to make it appear cops pick on black people. That's where we are in this country we have a media that creates it's own stpry's and they don't care who is hurt.

Anonymous Anonymous said...
Unarmed black man shot for running from the police in Salt Lake City Utah. Shot in the back. At 50 years old. He was running away from them. Is the cop handicapped and incapable of pursuit? Incapable of firing a taser?


That's a big part of the problem. Why was he running away?? It's a big game to "people of color" so many think they can commit a crime and get away with it. If I was in charge crime would not pay. I am not saying he should of been shot, but why do so many people choose the life of crime?

82,433 supporters signed the petition so far. Keep it moving.

Simple;call a truce.You leave our statues alone and we'll leave yours alone.You take ours down and we'll take yours down.Nothing difficult about that.

Im black and Ray Lewis is nothing but a tap dancing "knee praying" opportunist. Playing both sides. Shannon Sharp fried his goose. Yeah he should stood.

Rite especially when its used to overlook bigger issues. All that talk about disrespecting veterans but the United States continues to lack proper care of them after they have served in wars, retired and or mentally breakdown after years of service. Honestly that to me is where the focus should be.