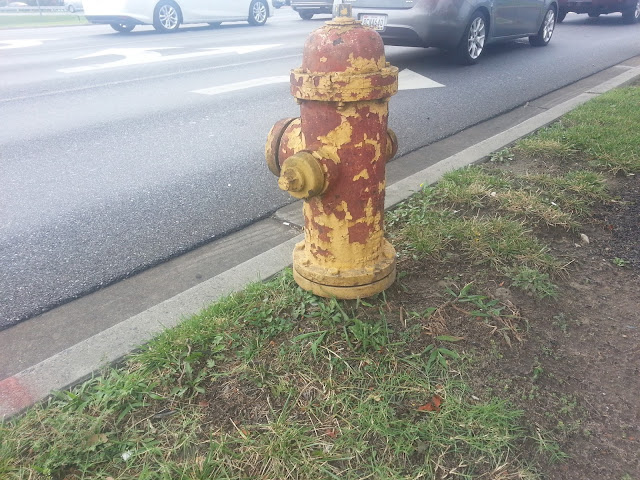 Get off your asses and paint these disgusting fire hydrants around the entire City of Salisbury. This is not only embarrassing, you are paid incredible money, get incredible health benefits, disability and retirement packages. Start giving back to the community that pays you and stop pointing fingers at VOLUNTEERS.
at 7/30/2017 06:00:00 AM

Good Idea! If they aren't painted soon ,
from the looks of this one , they'll not
be able to "Find Them!"

Paint them reflective blue. Then they can take up the markers they put directly in the tire path of driving lanes everywhere.

You know everyone complains about firefighters, until they need one. Its a shame that you did not want to take the risks, or chances to become one in your life. I mean I am sure you had higher paying jobs, and did not have to work shift work, or holidays. I get that, and it makes sense. Sure they sit around after running call after call at times, but have you ever seen city workers? or county workers? How about the people who work in offices? are you not sitting on your butt all day also. Your not working 8 hours none stop I bet, try working 24 hours none stop.

Point is - who risk their life for someone property, life for what they really receive? You, the people who complain? Would you even get up in the middle of the storm to help a neighbor?

You dont like the administration of the department, thats fine. Firefighters are not your issue, your fear of being one, or envy of is. I hope some day you will stop being jealous and volunteer to see how hard "one" fire could be. Or how hard it is lifting 300+ pounds of dead weight over a railing with a stretcher is.

Dont be Jealous - step up - volunteer - see what its like, then make stupid comments.

We will get on that after group trolling at Acme.(Takes 5 of us to buy groceries for the sleepover)

This whole paid vs. unpaid firefighter deal is just ridiculous. If you're a firefighter, your number one concern should be your job not politics. DO YOUR JOB and quit bitching. You're worse than a bunch of hens in a knitting circle, pissed because some knitters are better than others. It's not a competition.

Painting is done not by firemen, but by public works employees. The City of Salisbury employs something like two painters for the whole city, and these guys are busy, busy, busy. They don't stick around watching the paint dry, believe me.

It sounds like something that prison labor could manage, though.

National fire codes determine what color hydrants should be painted, based on the water pressure available at any given hydrant.

Not to rain on your parade or anything.

Everyone can do someone else job better - until they are called to do it. Fear is only thing stopping you from applying for a job - dont complain about someones job unless you have done it.

Stop knockimg ALL of our firefighters! Some are good people!!

10:14 get over yourself there are a lot of jobs just as dangerous with hours working more then your blessed firefighters i had one for 20 years don't scream how bad they have it they get good money to do what they do and benefits better most people they chose there job no one made them do it my tax dollars do pay to take care of the equipment if you love your payed firefighter so much get out there and help them you go paint them for them

10:14 Some of us worked and took the time /effort to be firemen for free to serve our communities. I put 15 years in as a volunteer. Have hundreds of hours invested in MFRI and OSFC training and thousands of hours of training time. Also have a Master's in Public Safety from a real university with a campus and nationally recognized sports team. The SFD is a joke. No qualified leaders, no education and no honor.

If a fireman were to paint the plug, a city painter could call the union man on him.

Fire hydrants are not important to Fake Day. Chain link fences are.

10:45 - Thank you for your volunteer service. Couldn't agree more. "The SFD is a joke. No qualified leaders, no education and no honor. I would add it is a "family business" for some families, with each generation getting lazier and dumber. If Jake Day had a clue, he would hire the best and brightest to run SFD, but then again - he isn't the best and brightest either.

To who ever took the picture....try putting your phone down get a wire brush and some paint and paint it! DUH it's easy to find something for someone else to do.....

"DUH it's easy to find something for someone else to do....."

People who use DUH are generally stuck in the 7th grade. Grow up! You look like a schmuck.

11:41 it shows the stupidity of those riding around too lazy to do the fix themselves! Idiot....

I am a FF guess what it ain't our job A..HOLES.

Maybe time to change that. They are paid with time on their hands.

WOW...you just made yourself, as a fir fighter, look trally good by calling people A..holes. You obviously need to grow up, let this stuff roll and just fo your job! WOW!

I guess the hydrant looks better than a chain link fence. ROFLMAO

11:54 - perfect example of why the majority of the public has a problem with the Salisbury Fire Department and PAID firemen!

11:54 Your uneducated, ignorance is showing. If you think this helps your department, you are sorely mistaken. It is this kind of attitude and actions that has caused the public to lose respect for you and the entire department. If your Chief thinks this makes you all look good, he is as dumb as you are.

And while you're at it, paint them a glow in the dark color so you can see them at night since all the blue things in the road seem to be coming up.

They should really use some better paint and do better prep work.

Ocean City rips families off by leasing a boardwalk bench to place a family members name on them. Salisbury could charge a big dollar for the plugs. Give the city a YUGE amount of money to honor the deceased.
12:33, just because a comment states the writer is a fireman, doesn't mean it is so. Anyone can say anything on here.

Has anyone been to Blacksburg, Virginia lately?

All of the fire hydrants are painted Hokie Colors.
And they are beautiful.

Why markers? Cant they see the hydrants? Waste of money. They need to do something to earn their pay.

I was thinking if they would put those little blue things on top of the hydrants other then on the road would that make it easier to see and stop getting messed up on the road. Just saying (map)

Perhaps neighborhood residents could be recruited to paint the hydrants under the supervision of a firefighter. Might be a great way to know the people who come to the rescue.

Bryan Records should be out there painting them. That way, he wouldn't have so much time to screw around on Facebook like a little 12 year old girl. Who cares if it's your job? Obviously public works needs help. Step up and help. You have quite a bit of "down time" and are being paid. Do some work. Have pride in the community your serve. We all know that is a farce. You just want to get a paycheck for doing nothing. You guys are no better than welfare recipients.

9:06 Yes you can. I'm no longer in the fire service but you try finding a hydrant at night in rainstorm with the wind blowing 15-20 mph. It's not that easy and I bet you would rather they water gets to your fire sooner than later.