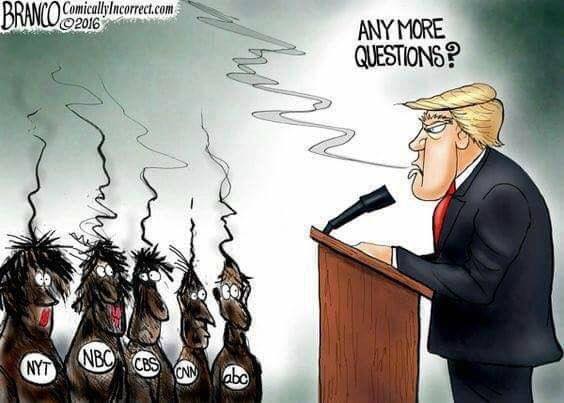 What about respect for the US Constitution?

You know, the document that delineates Freedom of the Press.

Means you can print whatever you want Doesn't mean you have to acknowledge a lying smart ass reporter.

8:23, ALL reporters were NOT thrown out and were in fact in the room. That being said, there's NOTHING in the Constitution that says Trump must answer their questions. Looks like the Blogs will finally get their just rewards in the end.

He called them out on using their Freedom of the Press responsibly.
I have no use for many of those 'news' organizations as I don't trust them. Pretty sure Trump and much of America feel the same.
Cry me a river, CNN.

He didn't insult any journalists. There were only one or two of them in the room.
These "reporters" were, are, and will always be, in the pockets of their liberal loser bosses. They are propagandists, NOT journalists.
EVERY question they ask is designed to be the next sound bite on the Sunday talk shows.
It's ALL about the "gotcha" question. Too bad they didn't have any of those same "gotcha" questions for the exiting buffoon. It IS very difficult to ask a question when you are on your knees and your mouth is full.
Mr. Trump, PLEASE keep smacking their ace and reminding them that they are liars and slimy, untrustworthy stewards of a Constitutionally protected group.
Newsweek, after praising their loser hero for years, went out of business, but not before finally telling the truth. The New York Times also admitted surrendering their role as a journalistic entity to become a cheerleader for their hero, too.
CNN didn't even bother to TRY to act unbaised. Neither did MSNBC, ABC, or NBC.
Now they are upset that they are being called by their true colors??
They'll be lucky if they can find out what Trump had for dinner last night.

your correct but has nothing to do with the president and fake news.

To me CNN and others lost their rights when they campaigned for Hillary knowing that was not ethical journalism,they are propaganda outlets for democrats.

Trump should not be disrespected like that.
I really don't remember Obama being treated that way.

All the Clinton Press there together !!!

Just Proves the Media IS BIASED and Not Objective !!!!

Trump beats them Every Time !!!! They not used to that !!