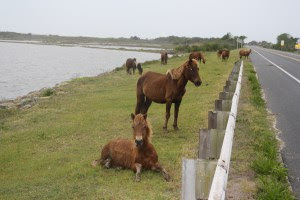 ASSATEAGUE ISLAND — The harsh realities of sea level rise and climate change have forced Assateague Island National Seashore to admit that it is at a proverbial crossroads.

Yet, as the beloved local and federally owned landmark enjoys its 50th anniversary, it also faces real questions about its future. Over the course of the last 90 days, the public took the opportunity to speak out in full voice about the various alternatives outlined in the General Management Plan.

Assateague Island National Seashore Superintendent Deborah Darden sat down with The Dispatch this week to talk about a lively public comment period and how the plan for the future of Assateague could be shaped by both Mother Nature’s wrath and the general public’s wishes.

Q: There’s been much conversation over the course of the past 90 days about the future of Assateague Island. Before we get into the details of it all, was it surprising how the conversation, thanks largely to social media, went from a calm plan for the future to something that resembled a bit of mass hysteria as word spread that something so beloved like the National Seashore could allegedly be “going away?”

It's a sandbar. If you view the barrier island from the air, you see a vast, churning ocean and a toothpick strip of sandbar.

To the south, Cedar island, a continuation of Assateague. If you look up real estate transactions on that island, you will see the same landowners buying lot after lot there, as they must constantly move their houses to a new lot on new pilings because the lot they bought previously are now out in the ocean.

Whether the sea level has risen; from what benchmark do you measure?

she's (darden) is an obamma liberal appointed tree hugging pos. Her goal is to drive most all human activity out, except of course the birdwatchers. why arent the republicans calling out these aholes and cutting their budgets!

Good post 3:50. Government just wants to find a way to keep people off the island/sandbar!

The objective is to close it off to the average citizen. Open only to who they choose.
They have tried it in past years as well.
I had heard years ago that they wanted to remove the ponies because they were a invasive species. Just the same old BS in a new year.