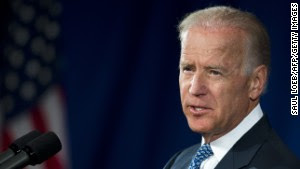 Tragedy has not just afflicted Joe Biden, it has shaped his political soul.

In the latest personal devastation, the Vice President must now endure the torment of burying a second child, after his beloved son Beau died from brain cancer Saturday night.

It's particularly heartrending because Beau, 46, was also a victim of an earlier incident that shattered Biden's life, a car crash at Christmas in 1972 that killed his first wife and an infant daughter and badly injured another son as well as Beau.

Stricken with grief back then, Biden contemplated vacating the Delaware Senate seat he had just won as a young rising star of the Democratic Party, but his decision to endure became the foundation on which he built his political creed and public service. In a famous photo at the time, Biden was seen being sworn into the chamber in his sons' hospital room.

Something I don't understand about what happened. We have had combat veterans die while awaiting VA treatment. How did Biden get admitted to Walter Reed so quickly when he doesn't even qualify for Veteran Benefits? If you have not earned those benefits, this amounts to free care. Who needs Obamacare if this is the case?

In no way do I mean to any disrespect for the deceased or his family but this has the appearance of abuse of privilege.

May he rest in peace.

In no effort to minimize this tragic death I would also like to point out what the msm misses.

Many Christians and Jews are being slaughtered in the middle east. It would be good if you could do more reporting on those poor innocent souls whose lives are being tragically taken in ways that are just as horrible as brain cancer.

Go back under that rock you crawled out from under 8:54.

Lmao. Abuse and privilege? So would you like a cup of coffee after your long nap?

8:54 Why do you say he didn't qualify for veteran benefits?

Why wouldn't Beau Biden qualify for veteran's benefits, 8:54? He was in the military and served in Iraq. Unlike you.

I was in both the National Guard (a State militia) and Army Reserve for 12 years. I was called to active duty by a sitting President. I can't go to Walter Reed for medical treatment and must pay for my medical care. Maybe someone here more enlightened than my self or the other poster can tell us how we can get the free VA care. There were some reports on Google stating Reed was selected because of increased security but even that is a crock.

Did Beau Biden have a service connected disability on top of brain cancer? Anon 1:24 PM has a valid point there. Most likely it has to do with association, plain and simple.

"Did Beau Biden have a service connected disability on top of brain cancer?"

All he did was provide legal services to the military and probably never got within thousands of miles of a WMD site (should one had existed). Regardless, there is no coverage period beyond the 5 years following discharge. This is the law.

There is no question that he was sick. The question is why the Biden's chose and were permitted free VA healthcare (that Beau wasn't entitled to) over a possibly more qualified pay as you go institution like Hopkins.

A lot of military families have suffered and lost love ones as the result of the VA's lack of attention and responsiveness.

The "famous photo" was a staged political theatre event to show how Joe Biden was dedicated to his family AND a nonstop servant of the people. Think they just showed up in a hospital room with lights, camera and a dozens aides clamoring about????
There ARE two sets of laws and apparently two sets of rules.
One for the Masters (and their families) and one for the serfs.
Explain the Walter Reed thing. You can't, without invoking the two sets of rules.
Your son, who lost both legs 8 years in Afghanistan, would be met by armed guards at the door and told "turn around or be arrested".
Biden gets in right away.
For all the American kids who will never walk right or pick up their children or be able to complete a sentence, this is a big Biden slap across your piddling, worthless, little serf face.