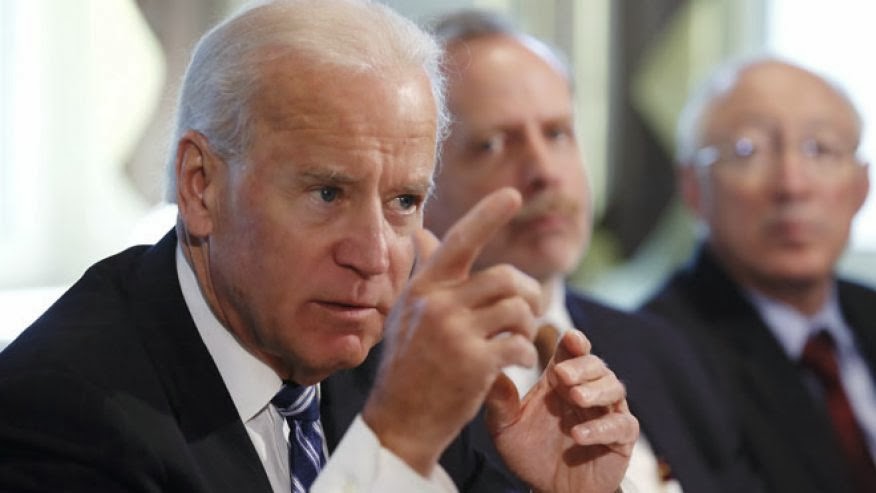 Vice President Joe Biden says he can't think of a good reason he should not run for president and that he will likely make a decision in the summer of 2015.

Really, after Obama is impeached he will have it till 2016...

I can think of at least one good reason for Biden NOT to run for president.

To put it in polite terms, Biden is just not smart enough to be president, or vice president for that matter.

He got in on the coattails of obammy and he should ride out of office on them as well.

Because a mind is a terrible thing.

dear 6:54
I can't believe you said he not smart enough. Just look at who you guys have now as president!
Obama is stupid as a brick!

Anonymous Anonymous said...
dear 6:54
I can't believe you said he not smart enough. Just look at who you guys have now as president!
Obama is stupid as a brick!
February 8, 2014 at 7:14 Am

But obammy is not the dumb one. The people who elected him/both of them, are the not so bright ones, no?

Obammy is on his way out of the oval office, Biden is a threat to be in that office. As is Killary, Christie, and whoever else can fool the people again.

And it seems some can be more easily fooled than others.

Now that Obama is in his second term he is cutting those EBT benefits that all his supporters love. Why? Because he doesn't need their votes again!

Anonymous Anonymous said...
7:32am -- And, who would you like to see in office then?

Not Biden, who is the subject of this post.

I can think of one reason why he shouldn't run - people will not vote for him. His elevator does not go to the top, matter of fact it barely moves.

I almost think the idiot Baines would be better than Hillary!

Sure more of the same.


The Clown Prince and the naked Emperor should have run as Dumb & Dumber if they were truly bent on transparency.

IIRC, in 2008 primaries Slo Joe got something on the order of 8,000 votes total in all the primaries he entered.

The only bad idea he hasn't endorsed is taxing rain, but give him time!

Joe Biden - Elevating the status of all previous undistinguished VPs!

The fight on his favorite train that he took to and from work before he was elected is bound to surface.Don't think for a second that the Repubs are defenseless.2 can play at that game.

Uncle Joe should be the dems presidential nominee.

How about because he is a nitwit with little honor and no code.

7:58: Romney, of course. Smart - humble - tough - tactful - savvy. He's proven it many times in the past. This country is crazy not to elect this proven leader. Period.

He has the IQ and personality of a turnip.