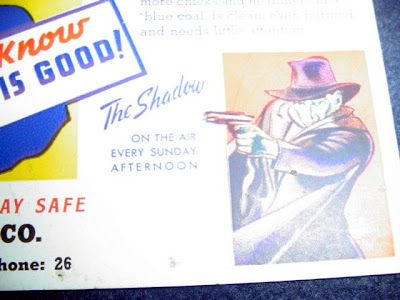 To most people today, the radio is just something that is on while we are riding in our cars. The preferred method of entertainment today is the television. But this was not the case when I was growing up. In a previous article I told about the Sunday ride. The ride had to conclude by 3:30 because that is when all the “good” programs started. Programs such as “The Shadow”, Philo Vance and others that captured our undivided attention began at 3:30. I relived those wonderful moments during my last years of traveling back and forth to work in Nanticoke. From my driveway to the parking lot at Nanticoke Seafood was exactly 30 minutes. I found a source for cassette tapes of old radio programs and loaded up on the wondrous stories I had forgotten since childhood. Nowadays, I don’t go anywhere that takes the 30 minutes I would need to listen to a whole tape.

My grandfather had a really large console Philco in his basement. It was always cool there, even on the hottest days of summer. We would go down there and listen to whatever was on. Just the idea of the radio was a marvel to behold for two young boys in the early 1950’s. There were very few televisions so we didn’t know we were missing anything. We finally got a television in 1959 and were probably the last family in Salisbury to get one. Mom and Pop always thought it would interfere with our school work.

My grandfather built an addition on our house in 1950. It had a den downstairs and my bedroom was on the second floor. As it was being built, I remember telling everyone that Grandpop was building me a new bedroom and that he had to put the den under it to hold it up. The first Christmas after it was completed, Grandpop gave me a General Electric radio. It had a “sleep timer” feature that I just loved. I distinctly remember that it cost $50 at the time. It was probably the biggest entertainment appliance in our house.

When I went away to high school, they had very strict rules. One of them was that no radios were allowed. I had this little gizmo that looked like a rocket ship with the antenna being the station changer. It had a wire from it that ended in two “alligator clips”. My bed in the dorm was right next to a radiator and I attached the clips to that. Then I would insert the earplugs that came with it and listen to the radio. My favorite was on Saturday night when I could get The Grand ‘Ol Opry. I don’t know if he was on the Opry or if it was another show, but my favorite was George Gobel. He had two sayings that I have never forgotten and smile every time I think of them. The first was. “Nobody likes a fat man, but if he has money, they can tolerate him.” The second was “Did you ever wake up and think the rest of the world was a tuxedo and you were a pair of brown shoes?’

george, i hope you continue to share these wonderful insights in our history as long as you can.

i'm a faithful follower of this wonderful blog and look forward to this each saturday.

When I was a little girl, my aunt and uncle would babysit me on Saturday evenings . All evening I anxiously awaited that special time when my uncle would turn on the radio and let me hear those words "the shadow knows". I don't know if I got to hear anything else about the program, but I fondly remember that phrase! Thanks for the memory!

I found this old radio shaped like a church window,mostly wood with the dials,speaker and channel display in front.It has countries all over the world printed on the dial.It's about 2 feet tall,dates around 1930 from what I'm told and has big tubes inside.Of course it does not work,but I can imagine the day when entire families sat around it at night.Boxing matches,presidential speeches,Amos & Andy,The Shadow,etc.

George:
try mysteryshows.com. For a $10 donation you can become a lifetime member and listen to or download over 48,000 old radio shows of all kinds. One of my favorite sites!

xm and sirrius satelite radio has all the old radio shows on channel 82. also, you can listen to them on the internet free at old time radio.

I spent a lot of my youth listening to the great radio programs, The Green Hornet, The Shadow, Gunsmoke, Grand Central Station, Sky King, The Inner Sanctum, and more that I can't remember. I first heard, "Linegan Against the Ants, I believe with Rober Conrad, memory is failing,on Saturday a.m. radio, The Telltale Heart, the one with the snake loose in the ship's laundry room, what great memories, Thanks, George