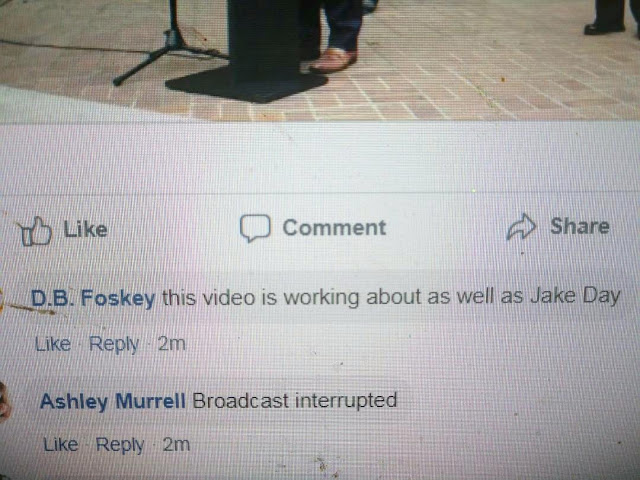 Jake went live a few minutes ago with Chief Barbara Duncan. The video kept stopping so the viewers have no real clue what was said. Nevertheless, it was the first comment above, D.B. Foskey who put Mayor Jake Day in his place.
at 4/04/2020 12:35:00 PM

that worthless pos has me blocked so I guess I can sue him for putting me in harms way since I cant see his fake look at me moments?

I just hope he enforces these rules. The foodlion on Tilghman Rd is made to follow these rules. That store is busy with way to many people in line which are not six feet apart. The store is still closing normal hours with no one deep cleaning when they close.

1:37 You're full of $#it. I was in there yesterday and checkout lanes were clearly marked and being adhered to. They had employees on nearly every aisle doing surface cleaning. Go back to Acme!

He’s putting rules in place that already exist , He just wanted some face time to make it look like he’s actually doing something

Jake needs some social media time. He's been quiet for a couple of days. I'm sure his commanding officer is wondering if the city of Salisbury mayor is a "critical job"

Haven't heard a peep out of "limelight Lewis". Some f'ing leaders you've got in Salisbury

Don't know if you saw this or not, Joe.

Salisbury Mayor Jake Day on Saturday took further steps to help stop the spread of the coronavirus by limiting the number of customers at stores and requiring them to enforce 6-foot separations between customers.

There have been reports locally of long lines and overcrowding at some stores as people try to stock up on groceries and other needs.

“The Lower Shore needs to be even more cautious than the western shore,” Day said during a news conference on the steps of the closed Government Office Building. “There are higher rates of diabetes, COPD and heart disease here.”

Underlying health conditions in people who contract Covid-19 have been responsible for higher death rates from the disease. So far in Wicomico County, there have been seven confirmed cases with one death.

Setting aside one or two hours per day for senior citizens and others at high risk;
Grocery stores not already offering delivery or curbside pickup options are urged to start;
Stores are encouraged to use 6-foot markings and use ropes or other devices to direct customers safely, both inside and outside;
Stores are urged to reduce the number of employees working closer than 6 feet whenever possible;
Increased cleaning of surfaces is recommended.
City Fire Marshal Eric Kramer said he will be notifying businesses of the changes that become effective Monday. Anyone violating the order will be subject to a fine or misdemeanor charges, he said.

Maryland Gov. Larry Hogan has put in effect some of the strictest social distancing requirements in the country in an effort to slow the spread of Covid-19. Essential businesses, including grocery stores, pharmacies, banks and gas stations are allowed to stay open, but most other businesses providing services, including barbershops have been forced to close. Since March 30, Maryland also has been under a stay-at-home order except for essential workers.

Day said he supports all of Hogan’s actions.

“The actions taken so far are almost unprecedented and have up-ended the lives of many people, but they represent the highest function of government which is to preserve human life,” he said.

Isn't Day a couple of days behind? Most companies have already done this. I haven't seen long lines in a week.

so what has become of the spd? Not a word about any of it lately. I hope this virus will not be a way to sweep it all under the rug more. A convenient way for it all to quietly go away.

Shut the hell up stop complaining stay your a$$ home if you dont like it.

I was hoping that this pandemic would bring people to their senses and closer to one another.
People, get the bitterness out of you and be kind .

You don’t do anything but complain about how horrible Jake Day is. Why not just move?

There’s hardly any cases in this county. Is Jake Gay so desperate for attention ? There’s no need to have these retarded daily briefings. Not even Hogan has daily briefings. Jake Gay just wants the limelight. He’s sick

Jacob Day great opportunity for you to get the construction done downtown. Put all other contracts on hold and get OUR town cleaned up and ready for action. Do not spend anymore money unless it is for preparedness for the virus. Time to finish Jake. No more construction, unless you can find a company that can bang it out quick, which you have not found. Nice that you want to inform the city, but I am fine with the CDC website. I do not know how many times this needs to be said. Our downtown is not ready for economic anything and you put us there. Clean it up!

THIS LASTED ABOUT AN HOUR BEFORE IT WAS PULLED OFF THE CITY WEBSITE. Then I was banned. Is that legal? The Jake trolls are allowed to tell Jake how great he is, why am I not allowed to post anything?

I sure hope Jake doesn't catch it 😁

I am so saddened that people do not know how to dispose of trash properly; especially with the virus! I would like to see the litter law enforced. Gloves, wipes and masks being thrown wherever people want to dispose of them! I have seen them lying in parking lots. I was at Fruitland Walmart sitting in my car today waiting for the person I took to get a few items and saw 2 people come out and put their groceries in their car and then before they got in the car they pulled their gloves and masks off and threw down on the ground. Wiped their hands with wipe and then threw it on ground. I didn’t think about a tag # and surely don’t open my mouth to people this day in time because people are getting shorter fuses and I cherish my life! Police: please write some litter tickets; not warnings-tickets!

Amen
Everytime we have gone prior to us putting groceries on the belt they have washed it. That's the last three times I visited this month

5:33 - As long as the other doors are not locked shut, walmart is legal

I totally agree with litter law etc. On south side trash is everywhere on vine st. Its just horrible.

What he shouldn't have said is that this pandemic could last for a year. What a way to calm your citizens.

7:30- I was here first. So,that's your answer? Run away? Nope. If you don't like the blog, don't read it! Finally, Jake Day IS a horrible person. I had lunch across from him 2 years ago. He is a solid POS!

The six feet distancing command is not being followed by Food Lion on Nanticoke RD because I was in there Friday with lines around the store. Price gouging has always been an issue with this store and since the outbreak of the pandemic it has gotten worse price wise. The DOJ is not going to do a thing about all the illegal mess harming the American people. What about our school children? I have read two articles from Dr Hanlon about the school situation with no clear results. I think all children with a GPA the last marking term should be promoted and the seniors graduate because this is not their fault that they are not able to finish the school year. I don't think the City or County leaders are the best ones at this time to be in office trying to handle this pandemic. The police departments are to be out making sure that people adhere to Gov Hogan's distancing guidelines but where are they?

So you need to pick minor things out on social media every few days just prove your point? If I said I met him in Walmart 3 years ago and he was nice would that mean I need to start a blog about him?

Anonymous said...
Didn't his girlfriend get busted for buying pills from a school student

Yes and she got caught giving my son BJ's for his Adderal. I gave him a High Five and called his doctor for another Script.

Anonymous said...
So you need to pick minor things out on social media every few days just prove your point? If I said I met him in Walmart 3 years ago and he was nice would that mean I need to start a blog about him?

WTH are you talking about??

Wayne King are you saying you had your comment deleted on the City's Facebook page and you were blocked?

If that is the case it is illegal. Ask RINO Larry about deleting and blocking fans on Social media.

Did you screen capture it?

Anonymous said...
Wayne King are you saying you had your comment deleted on the City's Facebook page and you were blocked?

If that is the case it is illegal. Ask RINO Larry about deleting and blocking fans on Social media.

Did you screen capture it?

Yes, the RINO Hogan got in trouble for it but Wayne King isn't intelligent enough to understand that, he is part Libertarian.

Jake you dumb ass why would you do a public press conference on rules that have been in place for weeks by Governor Hogan. I guess Smallbury is not part of the state now. I really tried to be open minded about you but you sure make it rough. Get out of politics. As for those worried about Mike Lewis no need to worry Covid 19 does not grow on turds he is safe.