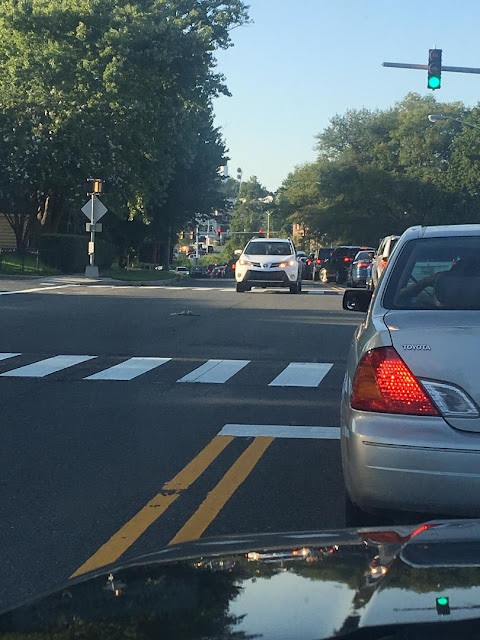 Just how many bad accidents have been on waverly. I have seen none in 38 years

The shore lost it's collective mind when they were talking about a traffic circle I'm not surprised this is happening. Horrible drivers there.

wait till the round-a-bout gets put in place

Lets be honest- the bike lane is here because Salisbury University runs this town and they do that Seagull Century thing every year. Jake bends over for SU.

Letter to the editor.

This Lady, who I think is a big supporter of Jake Day, was at EVO yesterday and had her nice Schwin bike stolen right of the bike rack at EVO.

Here it the link to her FB page and her plea for help in finding her bike.

By now your bike is no longer white. The entire bike has been spray painted fluorescent safety green, this includes the tires. Even if your bike is located (most like in the Dovedale area) and returned to you, it won’t be worth fixing. Save yourself and your friends the effort and just go buy a new bike. You may want to invest in a good lock as well.

I clicked on the City's link and wasn't surprised to see that Manure Bota and Jackie Wefonder "Loved" it. I just can't see those two fat a$$es riding a bike anyway.

Two pigs in a blanket.

By now your bike is no longer white. The entire bike has been spray painted fluorescent safety green, this includes the tires. Even if your bike is located (most like in the Dovedale area) and returned to you, it won’t be worth fixing. Save yourself and your friends the effort and just go buy a new bike. You may want to invest in a good lock as well.

I don't think the point of the post was really finding the bike, it was proof that crime is NOT down in Ghetto'Bury.

People are now making the left right before the light into the health department lot to come out by Suntrust to make the left.. wait unti SU and school are back in session! This was such a well thought out plan, lol!!

I went to Manure Bota's "Vote for me for City Council" FB page and he had a campaign kick off and fundraiser at Johnny's Sub Shop on Saturday July 20th, 2019. I checked out the pictures and the only people that were there were:

That's a sad turn out for a Campaign Kick Off.

Manure Bota screwed over Shawn Jester and voted for Angela Blake to fill a vacant City Council seat and Shawn is still his friend. WTH!

Mary Beth Carrozza sucking up to Jake Day as usual.

Carl Anderton the unemployed clown that went to the Early Voting Polls every day and told voters to vote for Jim Mathias over Mary Beth and to vote for Dan O'Hare over Chris Adams and Johnny Mautz. Carl and Jake are two peas in a pod.

Watch out Bob Culver, Carl Anderton needs a job and he is coming after yours with the backing of Jake Day and Manure Bota.

What a cluster. I turned on Waverly heading South. I got almost to first light and I kid you not there was some dumbass riding a bike in the middle of the road heading North. NO he was not in the bike lane.

Nationwide we spent billions on wheel chair ramps and the disabled still wheel chair and ride scooters in the street. If modern America had public transportation that actually functioned and got you somewhere like it use too here and in First World European Cities. America has always been car obsessed to the point it's a now a necessity. I don't care much for cars or driving and I am certainly not getting on a bicycle anywhere near American drivers.

Wellfonder is a big troll on King's page. Her and the band of trolls act like they don't know each other but when you hit up their fb profiles you'll find they are all "friends".

I ran into Boda in Walmart once and asked him a Walmart associated questions and his reply was "I don't know its not my job". First thing I thought was, do you act like such an immature turd during council? Not my job? Too lazy to say, I am not sure but let me find out for you. That was it for me.

No one showed up because no one knew. He didnt want to risk having to buy anyone a cup of coffee.

When Jamal Gould was running all he could talk about was how we needed to drain our reserves and spend it on kids activities. Not a clue as to why we have reserves. Spend spend spend it all on the kids that are already getting a free ride. Free rent, free food, free medical, free phones, but now we have to pay to entertain them.

And Jared, he needs to put down the koolaid. Still riding the Bernie train. Choo choo.

no bikes in salisbury? no problem, build it (the bike lane) and they will come,and if they don`t come, no problem salisbury will just have really wide shoulders on all their roads.on the bright side it didn`t cost the mayor a penny out of his pocket.

Still beats Baltimore or DC at any time of day.

Commute over Waverly several times a week. Turning right from south Blvd, the first speed bump almost forced you into traffic coming the opposite direction. The right turn lane into the hospital was do convenient but now you are forcedtorurn at the traffic light. At least they took down the 2 left turn arrows since only one lane is now for left turns. Took two signal changes to make it down the hill onto Carroll today, the new back up is a pain. Glad no ambulances were coming to the hospital behind all the cars stuck on the hill.

Just read on fb, that Carroll street will go on a "diet" and be one lane each way this fall. This was a post from JD on someone else's post.