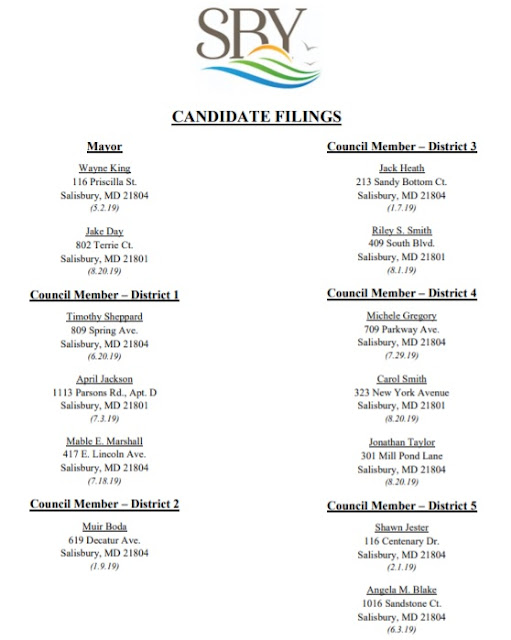 WON'T laugh when he wins.

Wouldn't THAT be interesting!

You need to run a series of all the awful things he has done over the years. Start with how he and Boda torpedoed you help with the Salvation Army Kettle Drive with their lies. How many million of dollars has that taken from the poor of this area?

He couldn’t make up his mind how to run his little blog site. Poor fella changed his mind with the tide.

What an embarrassing list of candidates.
So glad I moved.
No business people. No one with any relative experience.

Boda is running unopposed.
Which explains why he has put little fanfare into it

I hope someone has screenshots of all the vile racist posts he has had on his blog over they years.

1:56
The comments have not been turned off. Yours got through just fine.

SbyNews_Staff… He turned off commenting on his "off again-on again" blog.(1:56)

Jt will be in politics like he was with his blog A FLIP FLOPPER RINO.

Michele Gregory is not what is needed.

2:11 Thanks for the clarification. I was checking everything to see if there was a problem on this blog.

Gregory is like Boda. Run 100 times and eventually she will get in, by default.

King yes just shake things up Taylor over Gregory for sure . Jester is another Boda so this will be the most hippy lib admin we have ever had without King. Even Taylor but only if Jake is gone.

How the hell did Muir Boda get into politics ? I remember him as a low level Wal-Mart employee video taping cheap weddings on the weekends with a local schlock photographer.

He says if he wins he’s going to wear the grinch mask in there.

Boda got into.politics by running time after time until he won. Nobody want to represent that district, so he got it.

Don't vote for a bad day in Salisbury... https://imgur.com/a/WAkXYmr

5:46
I thought someone left the council and he was appointed. Not sure if someone ran against him after that or not. So the question is. Was he ever elected or just appointed and ran unopposed since.

This is pathetic; This has made my mind up to move from Salisbury. No business minded person among the group! No one to make an intelligent decision!

Judgement should be reserved until you see all the candidates' resumes. You might be happily surprised at the qualifications.

A sad cast of characters!

Can you imagine if that Social Justice Warrior wannabe Gregory gets elected?? WTF!

I doubt that, momma!

Staff, he is talking about the Blubber Blogger turning off comments on his hobby blog.

Of all people, Manure Bota was the main one I wanted gone!

Manure Bota should change his affiliation back to Libertarian because he sure isn’t a Republican!

We need people that are going to fire the current department heads and make sure we get the crime under control!

I bet Fake Jake isn't tweeting this or posting it on FB!!

Salisbury Police are investigating a robbery that took place at the PNC Bank at 1810 North Salisbury Boulevard Thursday morning.

Officials have confirmed that the incident happened at around 9:15 a.m., and that no one was injured.

The suspect is still at large, but that there is no threat to the public at this time.

Jake Day, is crime really down in da 'Bury??

Jake Day, are we really safe living and working in da 'Bury??

Anonymous said...
Gregory is like Boda. Run 100 times and eventually she will get in, by default.

BINGO!! And like Manure Bota, she is a friend and supporter of Gay Day!

Anonymous said...
How the hell did Muir Boda get into politics ? I remember him as a low level Wal-Mart employee video taping cheap weddings on the weekends with a local schlock photographer.

He is still a low-level Walmart employee. Now his job is being a Gopher for online orders. You see his fat a$$ running around with grocery carts filling the orders. What a lowlife POS!