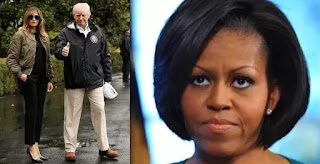 After First Lady Melania Trump appeared on TV Tuesday morning boarding the plane to visit flood victims in Texas, the left put her on blast for wearing high heels:

What those lobbing criticism seem to have forgotten is that then-First Lady Michelle Obama was engaged in politicking while Hurricane Sandy pummeled the east coast. According to Townhall, the first lady sent out an email soliciting campaign donations in both North Carolina and Virginia:

Some social media users are saying that Michelle Obama was not even present with her husband following Hurricane Sandy and are criticizing the media for getting on Melania's case for her apparel, since she actually made the trip:


Editor's note: Melania Trump changed her shoes on the plane. When she exited the plane she was wearing sneakers and a hat.  The left decided they would complain about her hat. 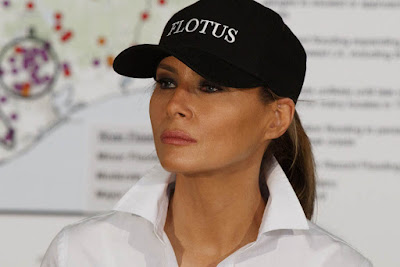 Go Melania. Hat is perfect. This shows she is involved and cares about the American Citizen and has compassion. All Michelle Obama wanted to do is use government planes and security to take trips, with the 2 daughters and her family, around the world and take a different plane to the same location when she joined Obama on trips.

The left will find fault with anything and everything involving Trump so that it will distract from all their own evil ways and from the good that the Trump team has managed to accomplish without them.

Idiots, all of them! No matter what good the Trumps do they will always critize because their "bosses" make them.

Melanie has done nothing as First Lady. She looks great and her clothes and shoes cost a fortune but she is worthless just like her old fat husband.

Did you see the clown-faced "Fashion expurt" that called her out on that????? What a clown face! COTR has it. Might be cotr.com ...

A bit off-topic...
My wife and I go back to the Kennedy days.
The beauty and grace of Jackie was mentioned constantly.
We - my wife and I - cannot recall even ONE mention of our current First Lady in that context.
Is it too politically incorrect nowadays to mention that a woman is beyond beautiful?


The yapping chorus upset about her shoes at The White House missed the fact she was leaving the residence and walking on hard surfaces. Across damp grass to the helo maybe more of a challenge but it's her feet that would get wet.

Both she and the President had several hours of travel before arriving and they were appropriately attired for the weather and circumstances when they arrived.

10:27
She has actually done a lot. She is not the attention whore Moochelle was. She is happy to visit children in the hospital. She is happy to greet visitors to the White House. She doesn't need to fly around the world on the tax payer's dime like Moochie and her brood did. She is pretty low key. I think that is why the media likes to criticize her. She likes to slip off and do things without alerting them about what she is doing. When they do know where she is going look how they attack her. Suck it up cupcake Donald Trump is your president and Melania is your first lady. Sorry it's been 8 years since there has been class in the White House.

Glad we have a classy first lady.

Right. What did Michelle do other then grow her already large arse bigger all the while preaching about obesity. Melania has brought class and grace back to the White House. Half the time Michelle looked like a cleaning women at some no count flop house rent by the hour motel.

More democrat lies. They lie and say they are for women and claim to hate when women are demeaned but they demean every chance they get. This because all democrats are nothing but liars and they all lie constantly. They have a lot of mouth but when they open it 99.9% of the time they are lying. All democrats are gross people who stand for nothing but lie a good game.

Fake News. All the headlines were saying she wore the heels to the hurricane. Not true. She wore the heels from the White House to Marine One, then onto Air Force. They were in such a huge hurry to try and make her a fool they published fake news before the plane even landed in TX having no idea what shoes she would have on then. It was great to see her with the sneakers on and them having their fake news rammed, jammed and smeared in their faces.

This is a perfect example of how the First Family can do nothing right in the eyes of the left and their lackeys, the media. Remember when they criticized the Trump's son for not dressing well enough on official outings? Now, they attack the First Lady for dressing up too much. Make up your minds America!!! Your stupid is really showing.

Of every photo I've seen of The First Lady (since Laura Bush), I can not find a flaw one. But look at the photo on the right of the Trump's, pure evil.

She is a classy first lady and not just because of her clothes, she supports her husband and at least like already pointed out went to the devastation in Texas because she cared. Leave the criticisms behind on her and the Trump children it is low these barbs against them are distasteful, low and cowardly.

They just can't say anything good. I'm sooo sick of it!

Well 10:27 PM, looks like you are just another left wing moon bat. Obviously you were an Obama supporter and probably upset that the free phone give a way is being outed for what it was...fraud. Are you a fraud? Are you a taker and not a contributor? Are you jealous or like many of your ilk under and uninformed?

And that's why we pay no attention to what the mainstream media says, or reports....

My God! She IS beautiful! Best First Lady (FLOTUS) ever.

Awwwwwwl 10:27. Now go and get in your safe space and I'll bring you a coloring book.
The Trumps have done more in a few months then the lying ghetto filth did in 8 years. The obama family nothing but garbage. They lied constantly, looked like trash people, let their children wear shirts of "musicians" who promote violence, disrespect of women and glorify gang lifestyle. They even let these "musicians" who sell poison in the White House. Ugly dirty people both inside and out who any decent person would not even breath the same air as such rank garbage. Hopefully Trumps had the White House fumigated after such ghetto smelly garbage moved out.

Is CNN or PMSNBC getting any ratings at all??

Man, as many times that I've seen this First Lady, I've never seen any of her shoes. I'm sure they are nice though.

Hell, I'd volunteer to carry her wherever she wanted to go... i'm sure a lot of Texan's would, too.

You are a complete idiot!!! Your comments are ridiculous!!! Your racist comments are crossing the line. It's easy to hide behind a computer, why don't you post your name so everyone can know and are what a true racist that you are!!!

The media is racist just look who owns them.

George Garvin.
Isn't there a highway you can block somewhere?
What? You want a name so you can organize a protest in front of someone's house and maybe even in their yard?
Break the windows in their car and harass them at work? Assemble a large crowd demanding their job???
Maybe having some kids beat their child up at school?
That might be okay in Baltimore, but here, there might be a different reaction.
Let's see now -- across the country, which group is assaulting, burning, destroying, and looting?
Is it racists? Or is it the pious left?
Keep cheering, you idiot.

There are plenty of good supportive stories regarding our First Lady. The libs just refuse to read them. Still sore losers. Get over it already!