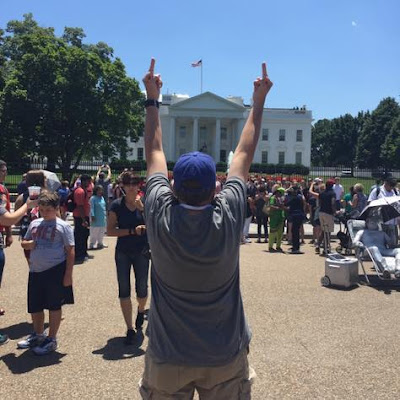 I couldn't believe that a teacher that was trusted to take middle school students to Washington DC on a school trip would actually stand in front of the White House and flip it off and tell the 6th, 7th and 8th graders that this is freedom of speech. He was right, it is freedom of speech. So I guess what he is teaching, it's all right to walk in his class everyday and flip him off because it's freedom of speech. I will be filling a complaint with the School board. I don't care how you feel about politics or anything else, but when you are trusted to lead students and this is what is being taught I think it's time you are held accountable for your actions while representing Warrensburg Middle School and the Warrensburg school district. Please feel free to share this post. I'm sure I will have a ton of haters but I don't care. Say and do what you want on your own time but not while representing the school. Here is the picture.

Don't think you'd care a year ago would you?

Freedoms of speech won't cover the teacher in a board review is compliant is filed. If he was off then maybe he would be ok but not while getting paid or IN CUSTODY of students.

I was born democrat. My family were all democrats. Obama and his policy's made us leave the party that we held dear... However we NEVER disrespected the office of President..we wrote letters begging not to put Hillary Clinton up and never got a reply.... The Democratic Party FAILED us and now we don't even RECONIZE it. Very sad

Send the MF to Iran.

Everyone has the right to free speech, but when you're working you represent your job and should behave in a manor that is respectable. Just my .02

Teach him how to use a table saw🤣

He's teaching by example and the parents should be very upset.

Absolutely 8:39 - Everyone has freedom of speech, but we do need to use that freedom wisely. Just ask colin kaepernick!

I was raised in a family of democrats. My father never knew how to vote for the better candidate. I watched him pass out miniatures and two dollar bills on the streets of Somerset County, in hopes of swaying the good people to vote for a certain candidate. Me being a kid, always thought that was so dumb, how did he know who they vote for in the booth after receiving their "prize". I have always been a gun toting, bible thumping republican believing in freedom of speech. BUT, this turd needs a good thumping himself. You respect the office, but don't have to respect the person. This dude could stand a good ole body slam in front of the "keds".
Trump/Pence 2020!!

Oh, I was ready to pitch my card with "R" until The Donald entered the scene and though I support POTUS, I'm not happy with the back stabbing party.

This is the problem today ! Letting idiots like this teach our children. I can see a day where there will be more Christian schools than public and our children will finally get an education once again.

If that were my sons teacher I would personally assault him.

True freedom of expression in its pure form.

I think most of the comments just did.