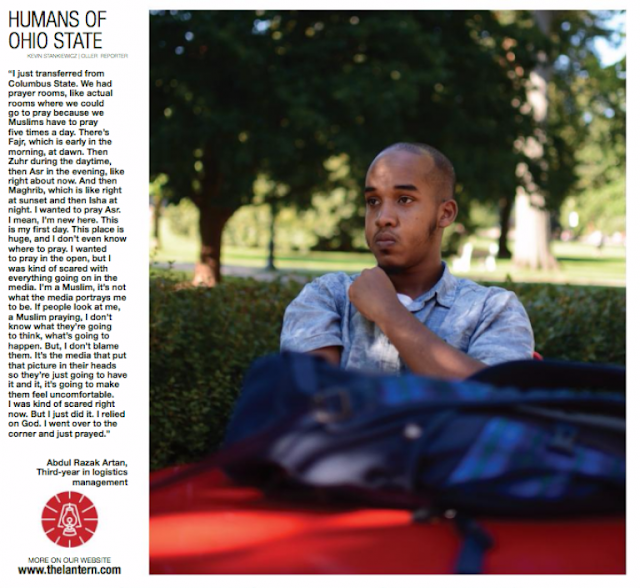 Suspected Ohio State University attack Abdul Artan reportedly complained to the campus newspaper in August that the campus did not have enough prayer rooms.

Artan’s full name is Abdul Razak Ali Artan, a man who emigrated to the United States in 2014, NBCNews reports. Artan was a refugee who’s family left Somalia in 2007, spent seven years in Pakistan, and became legal permanent residents of the U.S. in 2014.

Artan was profiled in an Aug. 25 segment titled, “Humans of Ohio State” where he lamented, “This place is huge, I don’t even know where to pray.” Artan said he wanted to pray in the open but was scared because of recent media coverage.

Sorry, but it seems this country is not suited to you and your wishes. Please keep searching for that "perfect country". May I suggest Turkey?

Wanna, pray? What's wrong with your own home? Nut job!!!

It amazes me about the media , they are blowing this way out of proportion , looking for a motive ? He's dead , how in the hell can you find a true motive?
A waste of time and energy and a waste of media attention . Another way to get the Clintons out of media attention . Listen up people , he is from Somalia , this country is a known for terrorist activity. It's an African country with muslim background.

You both (above) realize Abdul is no longer among the earthly living, right?

This is how the media stirs up anti christian hate and pro islam.

TFB. Find your own one that does. Maybe u just have to go back home?

Where are the Synagoges and church rooms on campus ? This is how this fake religeon starts wars within countrys.

Because he is a Muslim, he is afraid to pray in the open. After all people might think he is a terrorist. So he goes and proves them right! Somehow the logic escapes me.

peaceful muslim. oxymoron? find me one? one that will speak out against their atrocities. waiting patiently, while I clean my .....!

Gun control is, never mind he didn't use a gun. Car control then.

For what he did justice was swift, enough said.

I usually am uggh w/ the comments i see on here, but i agree w/ all i see today. Here they come to AMERICA and then want America to cater to their foreign needs & go out the way to do it. Soon it will b against the law to speak English when in the the presence of a foreigner.

And now he's being carved up like a Thanksgiving turkey on an autopsy table. How's that fit in with his Muslim "beliefs"?

Somalia....that's where they dragged our dead servicemen through the streets, when they were sent there to protect food distribution to the starving masses. And the Obama administration welcomes those animals with open arms, no vetting, and gives them "legal" status. Obama, and his policies, has endangered Americans for years to come. If only the clowns, that voted for him, had known what he meant when he said his goal was to fundamentally change America. Well done, asshole.