Stealing From Wal-Mart Is Not a Crime, UW Relations Director Declares 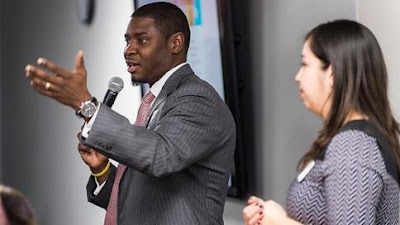 Everett D. Mitchell is the Director of Community Relations at the University of Wisconsin-Madison. He is also an attorney, pastor, and community leader.

At a recent panel discussing "Best Policing Practices," Mitchell said that police should stop prosecuting individuals who shoplift from Wal-Mart and Target.

His reasoning? He simply does not believe that police have any justification to engage in policing practices with thieves who steal from Wal-Mart or Target because they are big box stores with insurance:

He begins his speech by advocating legal relativism - the notion that communities should decide for themselves which laws be enforced and which laws are not in order to better recognize what safety means for the specific community.

Does Wal-Mart get a say in which laws are enforced, as well Mr. Mitchell? They are, after all, in the community as well.

Idiot scum that the left loves.

I'll bet he has a degree or two from Phoenix University.
An ATTORNEY thinks shoplifters shouldn't be prosecuted because the big box stores have insurance?
That idea is just one blurry line from stealing a new car for the same reason.
This "attorney" is really too stupid, by far, to have a law degree (one that he didn't get with two box tops and postage and handling) and has not, apparently, thought this idea through to it's end.

Now there is an education that is being wasted, That is if he has one.

More social justice BS!! while I agree that supporting the red Chinese Army by purchasing anything from Walmart is not in our best interests. His idea just totally absurd.

Each day gets better and better...you can't make this sh-t up!! Today's society is in bad shape.

So by his thought process he himself "should" have insurance, so people should steal from him, the police shouldn't prosecute, and he should just have to deal with it himself.

So, then the insurance rates go up to past the store security guy's paycheck then all the prices go up at Wal Mart, so more people just stop and rob as a usual thing knowing that there are no consequences, so Wal Mart shuts its doors.

Replace the Walmart with an amazon kiosk for placing orders and lets see where this kind of thinking goes.


He is an idiot, and it speaks volumes that U of Wisconsin employs him in any capacity.

He is supposedly a pastor and wants local communities to decide what 'laws' they want enforced? So if his church is broken into, the community decides whether to pursue or prosecute the thieves?

Wal-Mart and competitors do have insurance on their buildings, trucks, etc. But for retail theft they are basically self-insured, and regular, non-thief 'customers' pay the premiums in the form of higher prices to cover the losses due to the pastor's criminal congregation.

He should be reported to his state's bar association, as a first step.

well he does have a point steal from your local 7-11 or box store and go to jail. become a banker or a politician and steal all you want and never see a day in jail. double standard? you betcha!

Sounds like a good idea to me. Apparently your a big support of Walmart. I'm not. Keep cheering!!

If that's the case banks should not prosecute robbers.. They are insured, right?

The pastor needs to have another look at the Ten Commandments.

So if he has life insurance what does that mean.

Everyone hates Walmart! Why does anyone care if they loose some stuff?

It's coming, I guess, that blacks and muslims will no longer be charged with any infractions of any laws.

He is an idiot. STEALING IS A CRIME. That would be like saying don't prosecute someone for murdering an old person because they were going to die anyway. How stupid can you get.

Walmart is a criminal organization. I would not care if the police did nothing about someone robbing the mob.