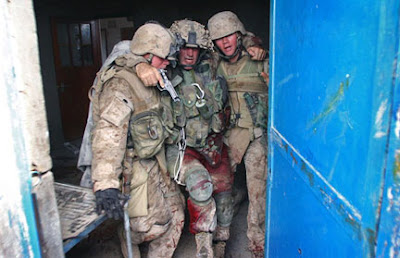 Sgt. Maj Brad Kasal being carried to safety by Chris Marquez, left, and Dane Shaffer, right, in Fallujah.
(Lucian Read/Hope for the Warriors)

A former Marine was enjoying his burger at a McDonald’s Friday evening when a crowd of teens approached him and demanded he respond to the question, “Do you believe black lives matter?” Shortly after this, the youths allegedly knocked the man unconscious and robbed him.

Christopher Marquez received the Bronze Star for valor after serving in the Iraq war.

Marquez said he was grabbing a bite at a McDonald’s in northwest Washington, D.C., when the group came up to him and started harassing him about the Black Lives Matter movement, the Daily Caller reported. “Do you believe black lives matter?” they asked him repeatedly. When Marquez ignored them, they began shouting that he was a racist.

After finishing his food, Marquez left the restaurant. As he was walking out to the parking lot, he allegedly sustained a blow to the back of his head, which knocked him unconscious.

I find some things so disturbing...

Pity he wasn't carrying. No, frankly these lives don't matter, regardless of color. The man served and was wounded defending their rights to act like a$$holes.

Paybacks a Medicac Semper Fi do or die

Bet this won´t be on the cbs evening news.

why do these f$&^ers always hit someone from behind? punks

What we need to do is round up all these thugs who like to fight and put a uniform on them, teach them discipline and ship them overseas where they can actually fight for something. Then maybe they can come back here and act like civilized human beings.

Sadly I have few doubts Christopher Marquez, is an INDIRECT victim of America's expanding and shameful *National Epidemic of Child Abuse and Neglect,* aka *Poverty*, that for decades has OPPRESSED and deprived untold numbers of emotionally abused and neglected young developing children from experiencing a safe, fairly happy "Average Joe and Josie" American kid childhood that Childhood Trauma Victim Kendrick Lamar laments he, his three siblings, numerous cousins, classmates and many neighborhood friends NEVER got to enjoy due to being raised and nurtured in a Violent Felon embracing family and community environment.

How much longer will America ignore OUR expanding and shameful sub-culture of immature American teen girls and young women of African descent selfishly OPPRESSING American society's children by subjecting children to *Child Abuse and Neglect,* aka *Poverty,* by building families with too many mouths to feed, clothe and supervise?

Mouths attached to children who far too often mature into depressed, angry, frustrated, unpredictable, sometimes suicidal *(NY Times May 18, 2015 - Rise in Suicide by Black Children Surprises Researchers)* teens and adults resenting their apathetic, immature single-mothers and/or irresponsible dads for introducing them to a life of pain and struggle, yet wanting to blame everyone under our sun except their moms and/or dads for depriving them of the opportunity to experience a fairly happy American kid childhood with *Safe Streets* to play or travel on.

There is a reason American recording artists Kendrick Lamar and the late Tupac Shakur rap or speak about depression and suicidal thoughts. That reason has everything to do with both of them being emotionally abused and maltreated by their CRIMINALLY NEGLIGENT PRIMARY maternal caretaker during a critical period of their human development.

There is a reason that for more than thirty years a substantial number of locally, nationally and internationally popular American music performers and recording artists of African descent have been demeaning and hating-on females in their music art performances by characterizing the *MATERNAL HALF* of our population as less than human ^itches and ^hores unworthy of respect.

How much longer will supposedly caring, concerned Americans TOLERATE/IGNORE the significant population of immature, irresponsible teen and adult moms SCOFFING AT their parental duty and obligation to their children, as well as IGNORING their societal responsibility to their neighbors and community to place the well being of their child(ren) *ABOVE ALL ELSE!!!*
_____
Peace & Prayers for Julie Dombo & Countless Innocent Victims of American Gun Violence

http://i.imgur.com/OgYnOsQ.png
_________
Doctors Ross and Dietz offer insights into how our Early Childhood Development plays a key role in determining the type of individual we mature into.

Robert K. Ross, MD, President and CEO of The California Endowment, addressed inmates at Ironwood State Prison offering a compelling overview of the role that exposure to childhood trauma plays in the lives of *emotionally troubled* and chronically ill American teens and adults.

At 2:12:25 in this documentary about Mafia hitman and victim of Early Childhood Trauma/Abuse, Richard "The Iceman" Kuklinski, Dr. Park Dietz explains why young Richard most likely developed into a emotionally disturbed, paranoid, cruel, heartless teen and man who did not give a frig about anyone else, including his wife and kids.

That was nothing but wasted effort. How much more money,time,and effort has to be spent on this race?? Every other race has come over came adversity and prospered. Not the blacks. Why??? Tell us that instead of the same BS line. Save the children. This article is about THE CHILDREN! !!

maybe these women should stop having children