Nat Turner, the leader of a violent Virginia slave uprising, will be honored on a new emancipation statue in Richmond 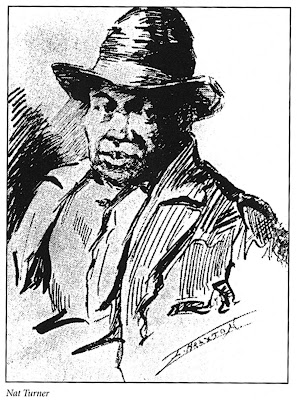 A state commission planning an anti-slavery monument in downtown Richmond voted Wednesday to include Nat Turner, the leader of a bloody 1831 slave uprising in Southampton County, among a group of 10 African-American figures who will be honored on the statue’s base.

The work on the new statue being done by the Martin Luther King Jr. Memorial Commission has thus far avoided controversy, but the decision to include Turner — seen as a freedom fighter by many and a mass murderer by others — is likely to bring a new level of attention to the planning process for the monument meant to celebrate the Emancipation Proclamation and the end of slavery.

Turner was by far the most hotly debated name Wednesday as a panel of state lawmakers and historians tried to select 10 honorees from a list of 30 finalists.

“If nothing else, he’s the bravest black man in that era,” said Charles Withers, a commission member from Roanoke who pushed for Turner’s inclusion. “It’s problematic for me as a black man in modern-day society to stand up sometimes. I can’t imagine the courage that Nat Turner had.”

He killed defenseless woman and children until being put down.

Good luck with that doubt it will remain intact very long

yet we had to take down statues of military veterans , icons of history, for what reason

Sorry but African Americans have become the sheep of Democraps. They use these tactics, was their an injustice, was it sad yes. Is it history, yes.

This is pleasing to them, because it appears to be the end of the white person. What they fail to realize, a lot of white people help pay for a lot of things. If the US eliminated ALL whites right now, the US would look like Detroit, Baltimore.

Sorry its true though.

I am offended only because he is black and I am a white privileged male without any statue of me now and doubtful in the future.

The Power of be want the generations to forget about our so called American History, just to repeat all the dirty low down deed the Power of Be have inflicted on their citizens in the past and current. They want they South to rise.

To not offend ISLAM and that's a FACT.

Can't honor veterans of the civil war but let us most certainly honor a murder of women and innocent children! That is just plain twisted sick thinking!

It will come down if erected.
fair is Fair

Will they tell the whole story about slave owners? Will they tell the story of Anthony Johnson (colonist) who had slaves on his farm in Somerset County, MD.? He moved from the Richmond area after being freed from slavery. That's right, he was a former black slave who bought and sold both black and white slaves to work on his tobacco farm in Somerset County in the early 1600's.

Nobody will take it down...As soon as you resist you are called Nazi by the media and discredited and dehumanized.


In his time, he was a domestic terrorist. Putting him on a statue with those who made positive, peaceful contributions dishonors them.

The slaves may have killed as many as 60 men, women and children.
The rebellion began when Turner’s small band of hatchet-wielding slaves killed his master, Joseph Travis, along with his wife, nine-year-old son and a hired hand as they slept in their beds. Realizing they had left one family member alive in the house, two slaves returned to the Travis home and killed “a little infant sleeping in a cradle” before dumping its body in the fireplace.

they need to do a day without white people. all white people should stay home, dont work and dont shop... lets see how the economy needs white people.

The Race war is coming

Then call me a NAZI.

Time for the right to stop this BS.

I AGREE.
AND the thugs better take Notice.

No, No, No, I am offended and appalled that they would even consider this.

A quote: Those who forget about history are bound to repeat it

No, I'm offended, not going to happen. Try if you must and if successful the memorial will disappear! So save the wasted money and go something GOOD with it!

-----
Turner was an educated minister as well as a slave.
Turner reportedly told Thomas Ruffin Gray in a jailhouse interview published in “The Confessions of Nat Turner” that when he was three or four years old, he could provide details of events that occurred before his birth. His astonished mother and others took the comments as signs that he was a prophet and “intended for some great purpose.” The young slave showed “uncommon intelligence” and was taught to read and write. His deeply religious grandmother nurtured his spiritual development. “To a mind like mine, restless, inquisitive and observant of every thing that was passing, it is easy to suppose that religion was the subject to which it would be directed,” said Turner, who regularly read the Bible and preached to his fellow slaves.

Nat Turner is a terrorist like ISIS by today's standards. Funny how they come from a Muslim continent.

I can just imagine that many probably said this rebellion would come after the civil war and Abe's asinine emancipation proclamation. It's taken over 150 years for them to go from slaves to trying to overthrow any rights that whites have, and tearing down monuments of OUR war heroes, rioting, looting and burning cities, and taking away white freedom of speech (n-word anybody?). They have turned our constitution on its head, all the while many being non-productive members of society living on the government dole. Black majority rule in African countries has led to the outright murder of "white people" and the confiscation of everything that whites used to own. What we are seeing in this country is a movement like what we have seen in Africa, but by a black population that is only 17% of the country. How crazy is that, in a democracy?

Now that its come to them tearing down white's monuments to war heroes, and replacing them with a monument to a black criminal (at the time), I am now the racist they accuse me of. Wasn't before, am now. I now look at my black neighbors differently. They stand for something that should have never been allowed to be.

This should not go up. Al sharpton jesse jackson and all the black activists need to be on the misson to mars.