'Ridin' With Biden' Bumper Stickers Urge Veep to Run in '16 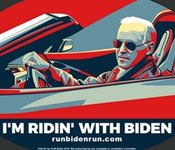 A Draft Biden 2016 committee is busy building a movement to support a Joe Biden presidential bid – replete with bumper stickers declaring "I'm Ridin' With Biden" – but the vice president isn't yet on board, The New York Times reports.

William Pierce, who launched a Chicago-based Super PAC, and other Biden backers insist he's the best Democrat to carry on the legacy of President Barack Obama, and have collected more than 81,000 petition signatures, sponsored house parties, secured endorsements, made fundraising calls, issued news releases and, on Saturday, will sponsor a rally in Davenport, Iowa, in hopes of getting Biden to toss his hat in the ring, The Times reports.

biden running for president is just as hilarious as hillary or the donald running and another couple of clowns,including omalley and we will have a full fledged circus

Hillary and Trump are running, which are much larger jokes than Biden running.

Actually trump is a lot smarter than any of you morons....the man started with nothing and is worth 9 billion dollars. Yep he's quirky....dam smart too. He's got my vote...oh wait aren't you all the same morons who elected Mathias again..... now that's dumb....oh and he can't be bought ...works for me.

@12:38 Trump's dad was worth hundreds of millions and was a NYC real estate investor as well. If that's having nothing, sign me up. Calling people morons with out the facts makes you...well...a moron.

Biden was in Congress for 37 years for Delaware. What did he do?? Gm GONE. CHRYSLER GONE. DUPONT GONE. Yeah let's vote for FOOT IN MOUTH BIDEN.

Oh, oh, oh...I want a whole bunch of these bumper stickers. Where can I get them :}

after 8 years of Obama this is just what we need.

Biden will certainly get the "Doofus" vote. Add O'Malley and you got the perfect Mid-Atlantic Clown and Doofus show. Would probably still be better than what we have now.

12:38 I guess being a lucky sperm is "coming from nothing". His dad built his empire, and he has failed more in his personal ventures, but he can, since his dad's empire rolls strong. You, sir, should do your homework before insulting people on the internet.

Also, "he can't be bought"? How so? Do you know how many business dealings he goes through? Do you know how many States BUY him moving a venture to their state, and the tax kickbacks he gets for doing so? I doubt it. But, feel free to sit in your cage and fling your poop, it is a free country.

PSA: I did not vote for Mathias, he is a clown.

"Ridin with Biden"?? If you're driving a clown car or a short bus, maybe.

I am not embarrassed to say this. More combat wounded vets than ever are waiting in line for care and some even waiting longer. Biden has the wealth for commercially available healthcare but put his family at the front of the line meaning he BUMPED somebody who actually was entitled to VA healthcare. It's not as if Walter Reed is a better care facility than Hopkins, it was just cheaper for Joe. Maybe his son was incurable. Maybe the person that got bumped was curable and dies because they had nobody in Washington looking out for them.

As a Vet, I do NOT support Biden for anything.