Man Dies, One Week After Being Rushed To Hospital After Arrest 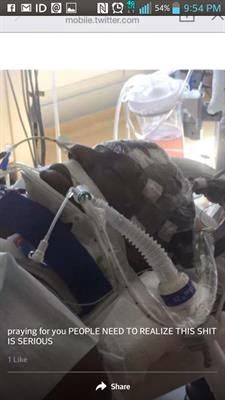 The man whose injuries suffered in a confrontation with Baltimore City Police last weekend has died.

A spokeswoman for Shock Trauma says Freddie Gray has died one week after he was rushed to Shock Trauma.

Police say Gray tried to run away, but a minute later, officers were able to catch and arrest him. Police say at 8:54 a.m., Gray was placed in a prisoner transport wagon bound for a police station but 30 minutes later, an ambulance was called for transport from the station house.

Seen the Wire? Then you know what happened.

As the police chased a healthy running man, he accidently fell down a 60 stair Metro rail entrance, but decided to run back up and fall down them again.
He managed to get up though, and in some crazy moment, jumped right in front of am Amtrak train.
The police finally caught up to him (he was very fast, even with all these accidental injuries) and using every lifesaving technique they knew, barely managed to gently place him in an ambulance.
As the ambulance left, the police were seen kneeling in prayer....
An internal investigation has already exonerated the officers and has found the victim broke his neck several times during the chase. He also kept trying to knock his teeth out, but the coroner was at a loss to explain how and why.
Now, it's bedtime, boys and girls.

Not sure what happened but I bet he would be alive if he had not decided to run from the police.

We are going to hear about this for months.
But what about the officers that pulled a woman out of her car, just before it ignited? 1 day of coverage...if that

12:16.....why? Because that's their job.
Killing people who run is NOT. In fact, KILLING PEOPLE should be pretty close to "last" when deciding your options when someone runs from people with guns. And a reputation for using them.
Its like the firefighter who runs into a burning building to save someone; it might get a story, may not. BUT if he steals a box of jewelry while he's doing it, well, THATS a story.
Did I go too fast?

Anonymous Anonymous said...
Not sure what happened but I bet he would be alive if he had not decided to run from the police.

there is no guarantee of that anymore and what an asinine statement to make anyway.

Your right. Ask wicomico deputies and their brothers around the country. If you run you die and guns will be planted for justification.

Apparently the thugs appear to be gaining political ground? somethings Stinks here! Is Our mass media pushing this agenda? Cops on killing sprees? I think not! just twisted and spun before airing and shoving the turmoil down our throats. don't fall for it, as most of us appear to be.

Yet we hear no more of the boy killed running from a deputy. Just one dead body and all the cop buddies. Oh yeah the gun that nobody but the cops saw.

yeah that's right. it's all make believe. no one has been killed by cops.