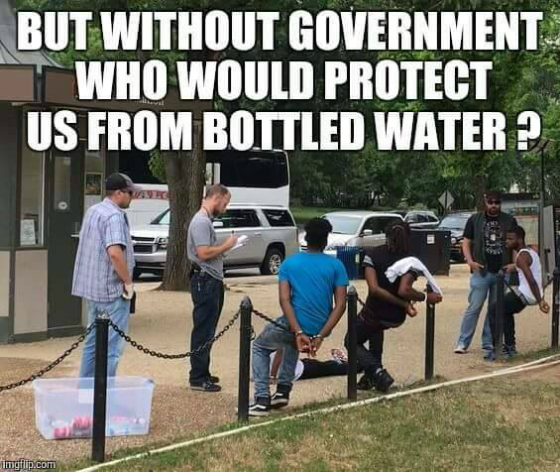 Lemonade stands, paper routes, and bake sales seem yet destined for the dustbin of history, thanks to an imperious State, which — to its sanctimonious detriment — manages to pull off seemingly impossible PR predicaments of its own making, like the handcuffing of teenagers for selling bottled water on the National Mall without a permit Thursday evening.

Perched atop chains interlinking fence posts lining the walk near Smithsonian Castle, three justifiably perplexed Black youth, wrists in handcuffs behind their backs can be seen speaking with U.S. Park Police — bottles of water resting in an evidence bin, nearby.

Tweeted by tour guide, Tim Krepp, as he passed the scene, photos of the three, aged 16 and 17, would appear to any casual observer without context to be a possible apprehension of at least petty criminals — not the three kids hawking bottled water for a few extra dollars to willing Washington, D.C., tourists on a hot day, that the incident actually was.

In Maryland for digging a pit,cutting forest down or digging stumps out of your own property can get you arrested also.

Wow. But the heroin dealer down the block is ignored of course

The guy selling herb 30 yards away is laughing his ace off.

THREE cops were needed to make sure these black capitalists understood that being black sometimes DOES get police attention.
Whatever happened to the cops who, back in the day, would have just told the boys it's illegal (??) to sell water to thirsty people unless you've paid the city the licensing fees, permits, stickers, and certificate. So, please pick up your stuff and go.
NOW, it's handcuff, arrest, and jail them. ESPECIALLY if you have black skin.
You may not want to hear that, or believe it's true. Tough break.
Look at the picture.
Keep cheering.

Of course Larry blames the cops instead of the law makers who actually made the law. They must love you at your BLM protests.