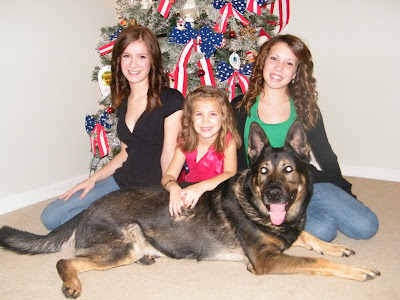 There has been some confusion about when Charlie was retired and sold to me. I attached a copy of the ownership and letter from the vet so you could see they are lying. That was my entire issue. Lt XXXXXXXXXX kept saying he couldn’t retire the dog because the “City council” needed numerous items and letters from the vet. This all concluded on Monday afternoon. I signed the papers as well as he did and I became the owner. I then immediately had the surgery on Charlie. They are telling people that Charlie was retired and sold to me 2 weeks prior and that I was angry because I wanted the city to pay. This is not true at all and id appreciate you making the citizens aware of the truth. 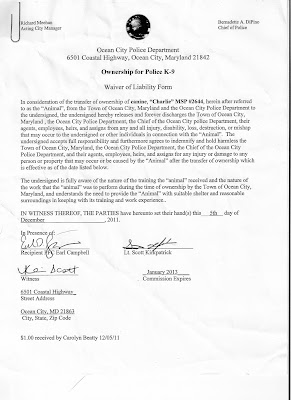 I am writing concerning the health and condition of “Charlie”, (K-9, German shepherd, Male, born 1/16/2005) patient identification number 672-15. On my November 10, 2011 examination of Charlie, I found that the reflexes to both his left and right pelvic limbs (hind legs) were diminished. The patient also shows mild difficulty with balance and use of these limbs. These are symptoms of nerve dysfunction and can greatly interfere with performance as a working, police dog. This condition is likely to continue to progress and worsen over the next few months. It should be considered, and I recommend, removing Charlie from active duty as a police dog.

I see (I think). The orginal post on this says you were turned over ownership in Nov when in actuality it was on Dec 5th.
Had you been asking since on or about Nov 10th (the date of Dr Watson's exam of the K9) for this transfer of ownership?

Thanks for the story "Joe".
The dogs got a good home.

I originally had read the article and thought the dept had retired the dog a week or so prior and the officer was upset that the city wouldnt pay for the surgery. Now, it makes me sick to my stomach to think the officer's hands were tied and had to witness his partner suffer and couldnt do anything about it. This gives credibility to the officer and shows there was at least one lie came out of OCPD.

Officer, I wish you and your family a happy holiday and commend you for standing up for whats right.

On November 10 Charlie was seen for his annual vaccinations. During that visit, Dr Watson noticed the issues.

At that time, Charlie was NOT showing major signs. He was not in any pain, simply had an issue with his balance.

Charlie then gradually went downhill. He became very bad and on Nov 28, I finally asked for Charlie to be retired. Charlie began suffering in extreme pain on the 30th. The following 5 days, he suffered terribly in pain.

The decision was finally made on Dec 5

God bless you and your family Earl. I'm sure like many of us, Charlie is a big part of your family and now your partner for life!

Charlie and the kids are looking happy at home. Wishing you and your family a Merry Christmas and a wonderful New Year.

I have known Earl for over 10 years and have worked with him in the past. He is a family man and a true professional. Having other friends in the K-9 field and personally seeing how much these dogs are a part of the family is awesome. These dogs love their job and love their family. I can't imagine how awful it must have been for his three girls to watch Charlie suffer. Therefore, I am not shocked that Earl resigned from a job he and Charlie did very well. I'm not here to disrespect OCPD. However, I am here to defend Earl Campbell's character. By the way I will be sending Charlie a gift card for Christmas,

I see. So in essence what you are saying is that it took from Nov 28 until Dec 5 to get your answer all the while the dog is in misery. I'd be freaking out. I would not have a problem paying for the surgery either, but it would also be in the back of my mind the ownership dilemma and the fact that had you gone though w/the surgery there was the possiblity of the PD retaining ownership and euthanizing the K9. I doubt if too many will disagree that you should not have been put in this position for over 5 days.

The dog was a police officer. He should have been treated with respect.

Charlie is more of a cop, and has way more integrity and honor as a canine, then the majority of the command staff at that department. Ocean City has suffered a major loss, once again at the fault of the tarnished command staff... Ofc Campbell and Charlie were an amazing duo and two of the finest law enforcement officers to ever patrol that town. It's time that the city council open their eyes and see what kind of lies and general BS their officers deal with from the upper ranks. Ocean City does not deserve to lose more officers like this due to the ignorance and lies of the brass in charge...Ofc Campbell, I wish you good luck in your next endeavors, you have and continue to stand up for what is right. Bless you, your family, and of course K-9 Charlie...

Campbell is a great man to look after his comrade in arms. He's not just a dog. He's a police partner.

As an ex-Captain with OCPD, I cannot imagine a Lieutenant having the final authority on this matter. Like to hear from him/her.

What a GORGEOUS animal! He looks so happy with his family. Great Job, Earl!

Mr. Richards, no offense, but it sounds like you haven't been there for a while. Who runs the department when the chief isn't there? Which is often...