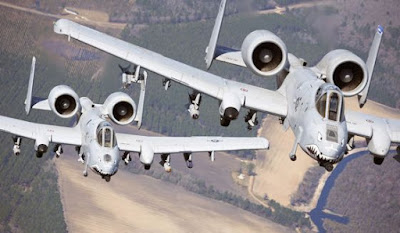 The F-35 Joint Strike Fighter stands to be the most sophisticated jet in the Air Force’s arsenal once ready for combat — but the Pentagon wants to first see how the state-of-the-art aircraft performs against its old standby, the A-10 “Warthog.”

Top brass in the Department of Defense said they’re preparing for exercises that will compare the capabilities of the F-35, its fifth-generation fighter still in the final stages of development, with those of the A-10, a close-air support jet that’s been used since the first Gulf War.

“The comparison tests on the close-air support mission will reveal how well the F-35 performs and whether there are gaps, or improvements in capability, compared to the A-10,” J. Michael Gilmore, the Pentagon’s director of operational test and evaluation, told reporters last week.

There will “absolutely” be differences between how the F-35 and the A-10 conduct close air support missions, Mr. Gilmore said, and comparison tests will help the Air Force understand the strengths and weaknesses of either aircraft before the Joint Strike Fighter is officially entered into combat.

The F-35 program is slated to ultimately cost the U.S. military $1.5 trillion, but the Air Force doesn’t expect the jet to be ready until 2021. A series of setbacks have already created obstacles for the program along the way, and Defense Department officials aren’t certain that the aircraft will be able to replace the A-10 in every aspect of air-to-ground combat.

Top brass from the defense dept. consist of mostly liberals and muslims now.

Keep the A-10. It is tried and true. Just because they threw so much money at the F-35 they think it is better. Typical government philosophy.

The F-35 pales in comparison to the F-16 and even F-14. More than a trillion dollars to develop a plane that is less reliable and less effective at any given mission vs. a specialized plane. Political interests have ingrained themselves into the system so much that nobody will kill this POS.

The A-10 is the best close ground support airplane in the world. And it will still be after the F-35 takes off.

An interesting takeaway from the article - they claim there is 10,000 lines of code left to write for the plane, and that it will take 3 years to do it. That's about 15 lines of code per day.

A10 has the lowest maintenance and operating cost of any combat
aircraft,yet one of the most versatile with devastating fire power.

Rules of engagement apply on land and in the air.Complying with same gives us no chance whatsoever regardless of technology.Think of it as the safety on a gun.The US gov has the safety on.There is no need to get excited until new leadership takes the safety OFF.

I have seen the A-10 in action live.,none better for close air support.

As someone who has spent a few nights in the sandbox, there is nothing that made me feel safer than to see the Warthog coming in low across our front. If you have ever heard their gun going full blast you will never forget it. This was the machine that made more white flags fly above the iraqi army than anything else. These planes are basically a titanium bathtub sitting on a big *** gun all on wings. You can not drop one. I have seen a couple of these planes limp back with less than half their wing surface attached. I have no idea how that plane survived but it did. Let me see the 35 do that. Can the 35 go faster, yeah. Fly with more weapons, yeah. apply stealth, yeah. but the warthog was built for one reason. To reign destruction on enemy tanks, APCs, and ground troops flying slow and low. The Warthog has no substitution.

Sadly, your govt will kill the Warthog ... again.