BREAKING NEWS: WE TRIED TO WARN YOU WEEKS AGO... 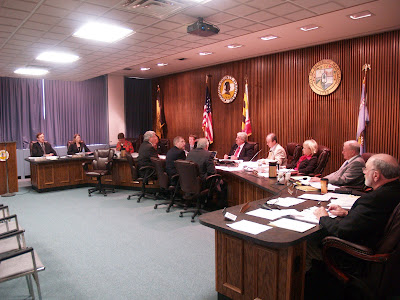 At 10:00 this morning County Executive Rick Pollitt made a rare appearance in front of the County Council to propose emergency legislation to increase the County Income Tax Rate from 3.1% to 3.2% by April 17th. 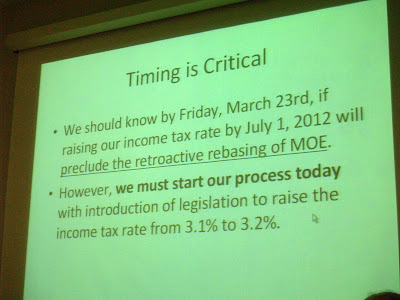 Based on the information only Salisbury News delivered on House Bill 1412 your beloved Governor, Delegate Norm Conway and others are BLACKMAILING Counties throughout Maryland to meet Maintenance of Effort with the Board of Education OR in Wicomico County's case be fined $14,000,000.00, in which the state would remove the proper funding to fully finance the BOE by taking those funds immediately out of the County's income taxes.

Now, there's no guarantee that by raising the income tax rate to 3.2% that the state will accept those funds as they are saying the legislation is retroactive, but there's hope it will work.

According to Mr. Pollitt, (in which he is correct)"the timing is critical" Councilman Bob Culver said, "this is legislative blackmail."

Mr. Pollitt went on to say that he doesn't think there's any doubt this is heading to court. In other words, the County will more than likely have to sue the state. The state is proving, (once again) its power over each County, similar to the Highway User Tax Funds that the state robbed years ago from the County.

Again, Salisbury News was the very first in the state to break the news on this legislation and we warned you it was coming. Today simply proved we were not only right, unfortunately the County, (you taxpayers) WILL be forced into paying more income tax to fund the Board of Education.

Rick Pollitt stated at one point that this is what elected officials do. They support the Board of Education when they run for office and in some cases pay MORE money above and beyond maintenance of effort to show their support. However, Council President Joe Holloway immediately stated, that's what got us into this mess, because we paid too much into it and the state can see we CAN do it.

He went on to say this emergency legislation takes away any incentive to ever consider doing more for the BOE down the road.

County Executive Rick Pollitt closed with this statement. We can't meet the $14,000,000.00 without shutting down the Sheriff's Department.

Some have wondered if this increase includes a property tax increase. The answer to that is NO. This is strictly based on an increase to your income tax. In my honest opinion, better they go after your INCOME than try playing the game with your property tax. What I mean by that is, (to me, anyway) your property values aren't expected to go UP in many years and its easier for them to go after your income instead.

In closing, Bob Culver threw out a very interesting question. He said, If we were to dissolve the County Council and let the state take over, what would happen. Wayne Strausburg replied, a bankruptcy appointee would come in and evaluate the dealings of Wicomico County. In other words, the County would go bankrupt.

Were you there to hear this firsthand? What was the mood of council- in other words, what do you think they will do?

Bankrupt, hell who isnt. Fifty percent of the people are and twenty five percent are fooling themselves, welcome to the party.

anonymous 12:34, Yes, I was there. As far as what the Council will do, they have no choice. They will vote yes to pass the legislation on April 17th.

Keep in mind Folkls, this means the BOE can do anything they want with their budget and there's not a thing the County can do about it. 100% of the control is now in the state's hands.

I was watching it LIVE on Pac 14 TV and I can tell you - FIRSTHAND - that the way the event is described is exactly the way it played out.

Bankruptcy is an option - according to Wicomico County Administrator Wayne Strausburg.

I heard it myself.

Praise the Lord! It is about time we support our Board of Education, our children, and our teachers! Also, maybe now I will get a raise. Thank you Maryland legislators!

Looks as though we citizens of Wicomico County are headed to Court.

I hope Ed Baker or whomever represents Wicomico sues the State's ass off.

If O'malley,Conway, and Pollitt are reading this, when things start to fall apart, be prepared to be reminded by everyone of us how you have managed to destroy our great state and economy. Don't think for one minute that you'll be able to handle any repercussions from this or the many other shoddy dealings you have gotten us into. We (citizens) have had enough of this.

Yes, the board of education is so well managed and so ethical we want them to have even more money to spend.

oh who gives a crap, just shut down the sherriffs department. They have cameras doing their job anyway

How about all the money we need to leave in the bank for things like this...like the over priced PARKING LOT at the civic center...pieces of property located on the water and lord knows what else we OWN and dont know about..How about the new guy hired at the civic center where did that money come from....
10 cent millionairs

What new guy?? I work @ WYCC, don't know anything about it. But I will say even if there was a new hire, the Civic Center is separate entity, the county wouldn't be paying for him. Maybe check your facts before you start spewing bile!

Strausberg does not know what he's talking about -- that's why Pollitt hired him to run things.

I think its time to move to De. Let the stupid bastards that think its all about education and children pay for it. This is all about politics. Hope ole Conway knows his ass is out!!!!!!

If Wicomico County is dissolved, then it would be split back into Somerset and Worcester Counties again. Since I live on the part that would merge into Worcester, I say DO IT NOW!

Which County -- Somerset or Worcester -- would get Pollitt and Strausberg?

Just about a month ago I saw on PAC 14 Wicomico's finance director Andy Mackel explain to our elected County Council that our County was showing signs of finally coming out of this depression and that the employment rolls had recently improved. Further I heard him state that funding the new Bennett Middle School was definately doable if the County Council decided to move.

Now - I'm hearing that we might be on the verge of Bankruptcy. How can this be? I swear I heard all of this myself! What in tarnation is going on?

They don't call Maryland a Tax Hell for nothing.

You are getting a birds eye view of it with both of these bills.

Maybe we should give the county and the city of Salisbury to the state and let O'Malley reap what his buddies Pollitt, Ireton, Mitchell and other cronies have sewn.

More taxes, more fines (speed camera's are a GREAT source of THAT), more fees, less services, more surcharges, more innocuous things labeled as "crimes" (to enhance the collection of more fines) are ALL being done or being enacted. These slimy politicians who DARE to call themselves "leaders" (and I'm talking about both Republicans AND Democrats) are NOTHING but thieves and Forest Gump types who can't stop SPENDING and therefore must constantly find new ways to generate revenue. They vote themselves the best of pay, benefits, income, and perks (did the Sheriff actually need a new all black, tinted window (illegal for REGULAR citizens) Terminator type SUV or is he just compensating for being so short, at OUR expense??) and put the hammer down on working taxpayers. The tree of liberty is screaming from thirst, and if Jefferson were alive today, I think we'd see a few a these self-important rulers hanging from the town square. Soon. And sooner than they think....

Wish I could sell my house in Wicomico County and move to Delaware - the powers in the county can only spend their way through a budget. Why ever learn to live within your means? If all of you that voted for O'Malley and Pollitt are pleased, good for you.

Don't tell me that Norman Conway didn't know the results of this bill. He didn't get to be the appropriations chairman for being a dummy. In addition he has a ton of staff that could have gotten the information for him. This is Conway being a good servant for the democrats. And this also shows who his loyalty is is too. It isn't us in Wicomico County. Shame on him!

Too bad we didn't elect Joe-Blow Ollinger. Anyone is better than Pollitt.

The only loyalty O'Malley, Conway, Pollitt, Ireton and Mitchell have is to their precious party, each other and themselves!

After the April primary, this Democrat will be switching to Independent. I can't stand either party any more.

I agree with so many of these comments BUT how can we expect to do anything about it if we all keep signing in Anonymous. Do you think your legislators or the governor are going to respond to Anonymous? It is time to tell Annapolis to stick to their knitting and let the counties conduct their business according to our constitution. The more we allow them to step on us, the more they will do it. If you feel as I do, then say so AND sign your name. Ed Carroll
BUT

5:26pm,
You just don't get it. It's all about that corrupted good 'ole boy system of things that been
operating in this area since the 1800's. Wicomico County and Salisbury Maryland will never change. We thought it would after the C. Dykes reign. His buddies just stepped up and continue with the reign. It's a sad day in this area. But, all of them WILL reap what they sow. These old dirty white corrupted dinosaur male crooks will reap what they sow.