Why Spend Billions On An Unnecessary Nuclear Weapons Facility? 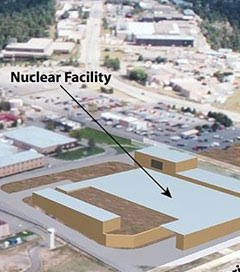 By all accounts, the cold war came to an end more than 20 years ago. Gorbachev rose to power, intermediate-range missiles were eliminated, the Berlin Wall toppled and the Iron Curtain lifted. Unfortunately, it looks like no one told the Department of Energy (DOE). The DOE is planning on spending billions of taxpayer dollars on a facility in New Mexico that would enable the US to increase production of nuclear weapons components.

The Chemistry and Metallurgy Research Replacement-Nuclear Facility (CMRR-NF) is a multibillion-dollar money pit that lacks a clear mission, is fraught with design complications and faces ever-increasing costs. President Obama recently pointed to the nuclear arsenal as a target for budget cuts - now it's time to act. As outlined in a new report by my organization, the Project On Government Oversight (POGO), CMRR-NF was first conceived a decade ago with the intention of replacing an existing Los Alamos National Laboratory (LANL) facility.