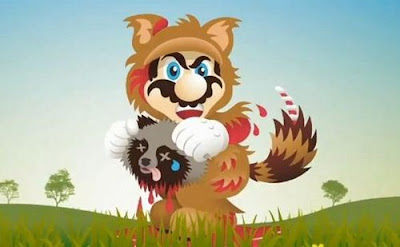 You have to give it to the People for the Ethical Treatment of Animals — they know how to leverage a pop culture event to promote their own agenda.

You see, Nintendo has just launched its highly anticipated game "Super Mario 3D Land." The game — which you play on Nintendo's new handheld 3DS game machine — features the famed plumber Mario making his way through a cartoon land filled with cranky mushrooms, man-eating plants and nefarious turtle creatures. On occasion, the mustachioed plumber dons a furry raccoon-like "Tanooki suit" which lets him float in the air and swat this colorful host of bad guys with a tail.

PETA please dispose of these idiots

PETA is a bunch of hypocrites.

That racoon was guilty as he!!!