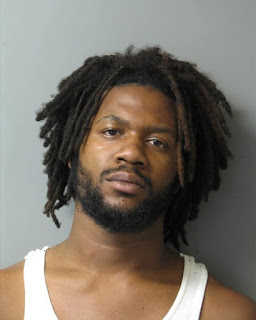 Tyrie J. Williams
Rehoboth- The Delaware State Police have arrested a Bridgeville man for heroin possession after a traffic stop near Rehoboth.
The incident occurred around 7:34 p.m. Sunday July 31, 2016, as a trooper on patrol in the area of Coastal Highway (SR1) southbound north of Shuttle Road observed a dark blue Mercedes-Benz E32 traveling at an apparent high rate of speed and failing to signal lane changes. The trooper conducted a traffic stop in the parking lot of IHOP, located at 36670 Bayside Outlet Drive, where the operator was identified as Tyrie J. Williams, 24 of Bridgeville.  A computer inquiry into Williams' license revealed it was suspended.  An odor of marijuana was also detected coming from the vehicle as the trooper made contact with Williams, who was traveling with another male subject and Williams' 6-month-old son.
All of the occupants were asked to exit the vehicle while a search was conducted. A bag was located behind the driver's side floorboard, just in front of the car seat in which the 6-month-old was sitting.  This bag contained a plastic jar normally used for baby formula with 507 bags of heroin (7.605 grams) as well as a glass jar with 34 grams of marijuana.
Tyrie Williams was taken into custody without incident and transported back to Troop7 where he was charged with Possession of Heroin, Possession with Intent to Deliver Heroin, Endangering the Welfare of a Child, Possession of Marijuana, Possession of Drug Paraphernalia, Driving While Suspended or Revoked, and various other traffic related offenses.  He was arraigned at JP3 and committed to Sussex Correctional Institution on $62,500.00 cash bond.
The 6-month-old child was uninjured and turned over to the mother at the scene.  The other male passenger was not charged.
at 8/01/2016 10:45:00 AM

How stupid can one person be? Why not just drive around with a banner on the car that says "Come and get me"?

He looks like a fine upstanding citizen that contributes to the better of society.