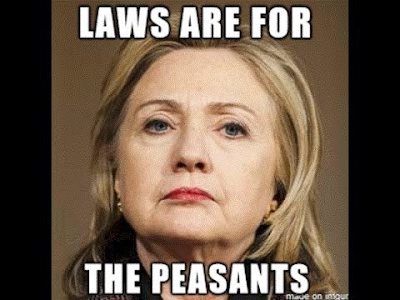 The American people have been water-boarded by propaganda and lies over and over until they believe it. When will we wake up ?

Clinton believes she's above the law, but time will not prove kind to her. The more everyone looks up her tail, the more crap we find. Democrats are insane and voting for their own demise if they vote for this Imelda Marcos wannabe. Clinton is no Eva Peron. She's a pop culture fascination with no substance and apparently, as per Comey, no brain to run this country.

If she really had a brain to run this country, A) She wouldn't have to Super Delegate Steal the primary and B) She would tell us her policies instead of relying on misinforming the public about her opponent.

Trump was friends with her in social circles. I'm sure we'll see all kinds of private parts flying to and fo. However, at the end of the day, Clinton is a criminal. A person who couldn't get security clearance from the US government. So why on earth would anyone vote for a mess like that is beyond logical thinking!