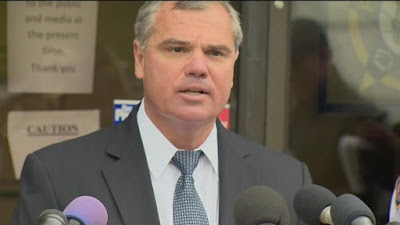 The president of the Baltimore city FOP Lt. Gene Ryan has issued a statement saying the spike in violence is due to criminals taking advantage of the situation.

"Criminals feel empowered now," Ryan states. "There is no respect. Police are under siege in every quarter. They are more afraid of going to jail for doing their jobs properly than they are of getting shot on duty."

There have been 38 murders in Baltimore city over the last month since the riots.

Just let them go, and allow non criminals to protect their home, business and families.

Cause the cops know it's really not proper the way they've been for the last twenty years! And the people have enough ability to record officers and hold them accountable.
Now..... Less afraid of being shot. More afraid of prosecution. Lmao! Is the dangerous job you cops scream about? Being criminals and going to jail? This F.O.P president has damn near made the case for the people while admitting the jobs not as dangerous as they'd like us to believe.

5:02 Why don't you take your sorry ass to Baltimore and walk those streets? You won't because you are all mouth. Carry a 20 dollar bill with you and go at night. You people that have no clue make me sick.

5:02 How about if you take a job as a police officer, then you get back to us and let us know how safe you felt.

And speaking of camera recordings and being accountable...there's plenty of video from the looting and destruction, I hope every last one of the savages is identified and charged with the crimes they were committing.

It's more than "not proper", it's appalling the way many black people have been, for the past 40 years or so. The last 20, they've been regressing further and further into spoiled helpless infants, incapable of taking care of themselves, screaming and boo-hooing, throwing tantrums and breaking things if they don't get their way.

Just THUGS killing THUGS, let'em have at it. When the killings all done it will be better place!

I'm thankful there were several people filming during the Freddie Gray incident. The videos are going to be a big plus for the defense.
One thing we've learned with all of this nonsense is that a lot of blacks will lie at the drop of a hat. Remember the "hands up" lie and the girl in Baltimore who said she saw the cop shoot the guy in the back. These people can not ever be trusted as witnesses.
This difficulty with telling the truth is a big reason why the race is such a mess. Honesty isn't valued and that has caused the culture to deteriorate to what it has including shooting little 7 yr old's in the head. I'm very disgusted with them. They all know about heroin dealer Gray but don't even know the name of the poor child who had the misfortune of being born into ghetto scum.

I grew up on those streets. Faced more danger than any cop ever has.

Why would I become a government thug? A henchman to the people? And I've served through 3 tours in Afghanistan. I've seen danger. True danger.

11:13 give a rest I grew up on those streets they were easy because it is what we knew. The cops are getting screwed. BGF is nothing but a bunch of boot lip punks. On streets we lived by street rules. The cops have one hand tied behind their back all the time. If I was the police in Baltimore I would not do crap. The Mayor and the Chief handed our city over to thugs. No one knows all the crimes that were committed during the riots. All the shooting is the BGF and the Bloods trying to establish turf again. Safe houses got hit during the looting lol. The thugs lost the stash and the cash. It is not over by a long shot those cops will walk trust me no evidence. Bunch of racist bs

oh bull . you kop suckers have brought all this on yourselves. just how long did you think you could go on killing people and their pets before the people got fed up with you? I don't want to hear it. If you're that damn scared, QUIT!! You are not effective anyway except maybe for generating revenue. BYE! and BTW, screw you michelle lewis.

you stupid kops really think it is anyone else's fault but your own for the way people think and feel about you? you have been REPEATEDLY warned to stop your harmful ways and you ignored them. now you want to cry the blues? go drive a truck or be a logger. you know, a REAL dangerous job and one you can't just kill someone because you are skeert.

It's more than "not proper", it's appalling the way many black people have been, for the past 40 years or so. The last 20, they've been regressing further and further into spoiled helpless infants, incapable of taking care of themselves, screaming and boo-hooing, throwing tantrums and breaking things if they don't get their way.

sounds like you are describing kops. and racist ones at that. the jig is up dumbo. the curtain has been pulled back and people are seeing you for the types you REALLY are. the lies will not work any longer.

You people that have no clue make me sick.

that's where you are wrong, AGAIN! we have more than CLUES, we have facts, we have witnesses, we have video, we have the U.N., we have the very few GOOD cops and former cops testifying, etc.

YOU and your ilk are the ones who have NO CLUE. and your days are numbered, thank goodness.

you next vacation will not be a paid one. you jerks better learn a REAL skill to fall back on when you are FINALLY weeded out.