Guerrero Gets Jolly....Jolly Gets KO'd 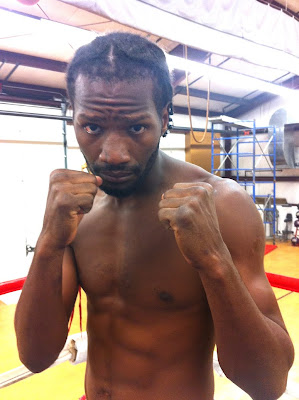 Duluth GA. You might say Alexis Guerrero got Jolly Saturday night in the most literal of terms. Guerrero stopped a very game Harvey Jolly, 12-18-1 in the fifth round of the scheduled 6 round bout.

The fight, held at Wild Bill’s Concert Hall in Duluth GA. was the eighth bout of the evening, and was a crowd favorite, as Guerrero stalked the bigger Jolly for five rounds. "Alex was confidant and moved forward with good head movement. He used his jab to keep Jolly backing up, then would cut the ring off and score hard body shots while working in close. He was able to dominated him every round, then put him away in the fifth” said Manager /Trainer Hal Chernoff.

The fight opened with both men coming out strong in an attempt to take control, Jolly trying to land his signature punch big, a powerful right hand, while Guerrero stuck to his plan of jabbing to keep Jolly moving backwards. Guerrero then began to add in left hooks to the head and body shots as the fight progressed. Toward the middle of the second round, Guerrero began to land straight right hands behind his jab to Jolly’s head. The constant pressure began to take it’s toll on Jolly as Guerrero got stronger with each round. "Everything began unfolding just like we thought it could, but Alex had to be cautious of Jolly’s right hand the whole time.

All the video we watched showed Jolly could not load up and did not throw his right hand when he was backing up” said Chernoff. So for five rounds, Guerrero held to the game plan of backing Jolly up with his jab to avoid his trademark right hand. Guerrero worked well to Jolly’s body and followed with sharp hooks and straight right hands to his head. With Guerrero well ahead on points, he picked up the pace and trapped Jolly in his own corner in the fifth. Guerrero landed a hard left hook to Jolly’s ribs causing Jolly to turn his right side in toward the roped, but that gave Guerrero a perfect angle to land a second left hook to Jolly’s midsection that buckled the knees of the 6’4” fighter and sent him down to the canvas. Guerrero was sent to the neutral corner as the count began but Jolly was unable to continue.

“I felt real good," Said Guerrero. "I felt relaxed and confidant because we worked real hard to get ready for this fight. We had a good game plan and the guys I sparred with in the gym did just like Jolly does, so that really helped me a lot. They played a big part in why everything worked so well. Coach and I worked on a lot of things, I used to tighten up in the ring and it makes it real hard to listen to instructions, but now I can think clear and just do what we worked on and what Hal tells me in the corner". Guerrero said. "Now all I want to do is get back in the gym and get ready for the next one. I feel like I moved up a level and just want to keep building on that”. Guerrero added.

Guerrero is expected to fight again sometime in late October or November. Guerrero’s Manager Hal Chernoff is also working to bring a fight back to Salisbury early next year.
at 9/17/2012 05:18:00 PM

Joe as Mayor,will you bring back boxing to Salisbury.