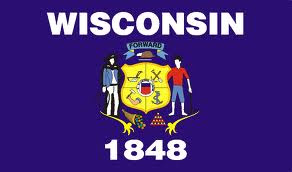 Of course the major networks did not report this when he was at Master Lock!!!!!!

When O buma stopped in at Master Lock in Milwaukee Wisconsin last week, he was walking the plant and stopped to talk with a plant employee and looked up at the banner hanging on the wall and said to the worker and people around him, "It is great to be in a union shop, especially one as old as this union is " - - -
- pointing to the banner. He then said, "A Union shop since 1848" - - - and then he went on to talk on what that banner stood for and how important it was to display it and show your union support.

The worker then said to O buma that it was the flag of the State of Wisconsin - - which was founded in 1848. DUH!

It is very obvious the White House has control of the national propaganda media but what exactly is the mechanism?
Do they have undercover operatives in every media outlet?
Do they have a phone tree?
Cans and string?
They even admitted quashing the daughter in Mexico for spring break story.
Obama is a FRAUD.

I'm sure he's made similar comments in all 57 states.

That's Obama for you. Dumb as a doorknob but the liberals trust him to run the country. Enough said. Vote for anyone but Obama.

Let's let Alex explain this one. He's got to have a good, solid explanation....maybe something to do with wingnuts or something...maybe the Harvard education was slowing him down, or he was tired from doing all the hard work of the President, which is not any work at all lately, just taking a paycheck from the taxpayers to CAMPAIGN for another four years. Just giving him a few ideas to work with...

Every been to Wisconsin? He will fit right in there.

He is a great fit for Wisconsin.These idiots have a governor that is turning their economy to the good and finding funds for education and the citizens are pissed off and want him out of office! Don't eat the cheese,you can see what it's done to their brains.