REP. OCASIO-CORTEZ: PEOPLE SHOULD BE ‘EXCITED’ ABOUT LOSING THEIR JOBS TO AUTOMATION 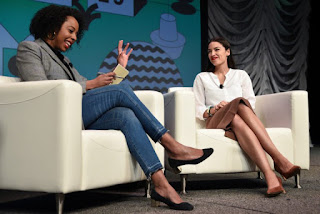 New York Democratic Rep. Alexandria Ocasio-Cortez said people should be “excited” rather than fearful about the prospect of robots in the workplace at a conference in Austin, Texas, Saturday.

Ocasio-Cortez’s comments came during a Q-and-A session at the South By Southwest Conference & Festivals, according to The Verge.

The self-described Democratic-Socialist really worked the crowd at the festival, calling the current state of America “garbage,” blasting capitalism, Ronald Reagan, the New Deal and even political moderates.

She also offered solutions to those who “fear” socialism, which prompted excitement in liberal TV scientist Bill Nye, who tweeted that Ocasio-Cortez “gets it.”

Lucky AOC gets to travel around the country on the tax payers dime! Expect to see her anywhere and everywhere.

Well, in her twisted and delusional mind, that logic makes sense. Lose your "job" to a robot, and you get everything for free, while you don't have to work for anything anymore. Ain't socialism great? Until it ain't, like Venezuela. And in her mind, losing your job is a good thing. Just like her being the driving force behind Amazon backing out of a deal for 25,000 NEW jobs in NY, her district that voted for her election to Congress. And then she BRAGS about it. Looney as they come. I love it that she is the "new" face of the Democrat party. In reality, the democrats have always been socialists, buying votes by giving away taxpayer money. Ocasio-Cortez is just exposing the truth that the Democrats have been cleverly avoiding all these years. Yeah! This will not turn out good for the party, and they are suddenly becoming aware of it.

This B...H needs to go to gitmo with OMAR.

The reason she thinks it is a good idea is because she doesn't care about others only herself and she thinks she is safe and set for life. Karma can get her and I hope it's sooner rather than later.

She is one dumb broad!

The only thing this idiot deserves is last rights

She is a swamp creature. Hiding millions of donations in LLC companies through the great state of DELAWARE. Why? State income TAX FREE and LLC only requires a mailbox. Also the deposits was under the federal top income tax rate. Basically the BIGGEST ADVOCATE for raising taxes is hiding money to Avoid taxes. 850k-MILLION DOLLARS so far.

Ya know, ain't it funny that we never see a news clip where somebody takes her to task and calls her out. I mean, if she is so sure of herself, why isn't she promoting herself up against the likes of Tucker Carlson, or (heaven forbid) Chris Wallace asking really well thought out questions.....


She's a blithering idiot, and that's a cruel comparison to idiots.

The reason AOC is a democrat is because she is the next logo for the party. A JACKA$$ in human form. Bet she even brays. She sure had the mouth and teeth for it.


Hope she's tickled pink when she loses her job next year and returns to pouring drinks and filching tips.