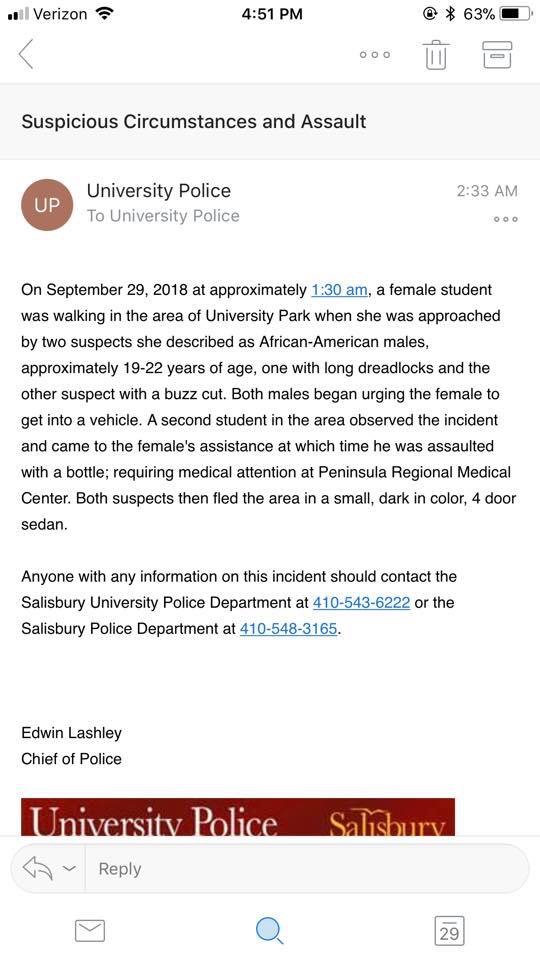 Nothing to see no crime sarcasm off

Thank you to the guy that had courage to step up. Very brave to assist not knowing if the turds had another weapon that cuts or fires. Thank you sir!

Ed Lashley, the biggest racist I know. Read his press release. He is careful to say “two suspects SHE DESCRIBED as African Americans”. Yet later, there is a “second student” who witnessed the incident. That student should have verified the race of the perpetrators. Instead of making the victim sound as if she is “making the race up or targeting the suspects race”, they should have verified with the witness and rejected FACTS. The press release should have said “she was approached by two African American male suspects”. Sounds like you don’t believe her Ed Lashley. It just doesn’t fit your racist agenda where all whites are mistreating blacks and all blacks should be free to do whatever they want. Honestly, Ed Lashley is the most inept, ignorant and racist person I have ever known. The ONLY reason he has EVER been promoted and in charge of things is due to affirmative action. Without affirmative action, he would have never been more than a slick sleeve road Trooper with MSP. Hey Ed, fat, dumb, lazy and racist is no way to go through life!!

Sounds like assault to me, School again try's to down play it by adding suspicious circumstances, what ever that is.

Nothing good happens after midnight!

No need to to do foot patrols to help prevent this stuff. Need to set priorities on the presidents parking spot. Priority #1 for SUPD! Ever go into the cheif's office? Look on his monitor. Direct camera view on that parking spot.

shut up! Shut Up! 65,000 people were at the Folk Festival. Everything is wonderful in Salisbury! Shut up and go back to sleep.

Ladies- buy guns NOW while you still can.

Barney Fife 110 will solve it he's a real hero. Wonder if he still has knee pads under 118's desk.

See this is WHY SPD and the mayor love COVERING up crime stats to the College parents if they REALLY KNEW how High crime was in Dabury SU would NEVER EXIST.

I looked all over the SU website to try to find this and I can't. Why do police make it so hard to find out what is going on in out neighborhoods? Is it because the public might hold them accountable for their lack of police work so they hide it so the public is not aware they may be in danger.

Welcome, an obvious SUPD member of the past. You've come to a great place to vent your frustrations anonymously. I hope you feel better about yourself now. Self heal and move on, it's ok.

You didn't find it there because university park is in the city police jurisdiction. SU sent out the information to inform the students of the incident.

Two cowardly turds. They will get their attitude adjustment one day.