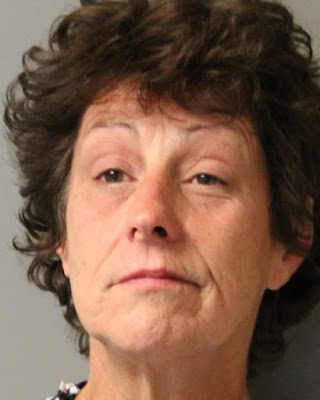 Millsboro– The Delaware State Police have arrested a Millsboro woman for her 7th Offense DUI after she was involved in a single motor vehicle hit and run crash.
The incident occurred on Sunday, September 30, 2018 at approximately 3:21 p.m., when Troopers were dispatched to the 26000 block of  Starboard Road in reference to a hit and run crash.  Upon arrival, Troopers met with the resident who advised that his mailbox was struck by a maroon Ford work van.
Through investigative measures, Troopers were able to identify the van and the driver, 56 year-old Kim M. Toohey.  Troopers made contact with Toohey on Sassafras Road who was driving a different vehicle at the time.  An odor of alcohol was detected and a DUI investigation ensued.   A computer check revealed that Toohey had six previous DUI convictions, making this her seventh offense. A search of the vehicle led to the discovery of drug paraphernalia.  Toohey was transported back to Troop 7 where she was charged with the following:
Toohey was arraigned before the Justice of the Peace Court 3 and committed to the Delores J. Baylor Womens Correctional Institution $20,602.00 cash only bond.
at 10/07/2018 05:00:00 AM

7th Offense! Should NEVER be allowed to drive again!

Not a care in the world!! Already thinking about the first drink when she gets out

I pray that you get the help needed to become sober.

Hey its Julie B MOM

Alcohol/drug addiction does not discriminate. The failure seems to be the court system. 7th OFFENSE for this danger to society?

isn't having multiple dui's a requirement for living in delaware? They do seem to have a lot of repeat offenders!

And you thought it was just men!

If this is her mug shot it says it all entitled till she murders a family,

Question: I'll give her a break on the fist DUI. Maybe even a little break on the second one.
But how much jail time did she get for #3? #4? #5? And number SIX?
I worry more about this woman driving a car than I do confronting a mugger that has a gun.
This woman could take out my family in one fleeting drunken moment and I could do nothing to stop it.
I could (and would) shoot the damn mugger.
Please get her off the streets.

time to lay off the sauce lady!

We kids always wondered why Grandma was so happy and relaxed most of the time, especially after a trip to the pantry.

What is wrong with the system that she's on her 7th?! Stop being so lax in punishment. Put them in rehab, jailtime, both. Absurd.

Please before she kills someone

If Delaware is like Maryland, she'll be back to driving legally or illegally in no time. Here you can get 7 dui's, disable your own interlock devices, and get no jail time!

How do they know she was drunk when she hit the mailbox? She was arrested in a different vehicle. Maybe she drank inbetween vehicles.

She told the police she was only drinking at the stop lights and not while she was driving.

They usually look defiant in their mug shots.

I pray for that too as one with going on six years of sobriety. There but for the grace of God, go I. But in the meantime, society must be protected from her.

I KEEP TELLING YOU

They don't give a rats ace about whether you live or die. They DO care an awful lot about MONEY. Your leaders.....lol.....you can't stop cheering that BS.
THAT is how one gets SEVEN DUI'S.
I'll bet the current State's Attorney is one of your favorite "law and order" guys. Hoo-rah!!
HE let her get 6 DUI'S and continue to drive.
Did you vote??