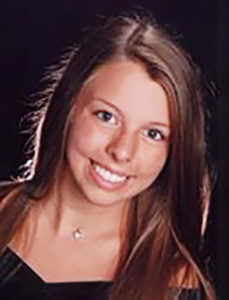 "In her Honor" is in partially our family's legacy of Morgan's memory. We are HONORING Morgan's life and RECOGNIZING this horrible epidemic that brought her down. In doing so, we are hoping that her MEMORY, the memory of how she lived, loved and eventually died; and the memory of what her parents are going thru daily; promotes the FIGHT AGAINST HEROIN. Not as a disease, but as a new way of life that so many young people are getting wrapped up in everyday.

This epidemic is real and stand by; because it is going to hit every family in one way, shape or form in the United States. You think it isn't? Things are going to get much worse, before they get better. So this K9 is a memorial for all of those who knew and loved Morgan; but a prevention tool for those who are headed down her path. Maybe one day you will be THANKING K9 Morgan and her handler for finding what you as a family member were too blind/ or too naive to see.

Sorry, but it is an epidemic of bad choices made by bad parenting.

No you can't blame parents!! This is a horrible epidemic.

Devastating for a family I am sure. But remember, a junkie makes a conscious decision to stick a needle in his or her arm, at least the first time.

The one s i feel sorry for are the people that get a surgery and then get hooked on drugs after there meds run out and are led to the heroin pipe ....the ones who do heroin for partying i feel ZERO SYMPATHY.

7:13 AM Do you always start your day being as a$$hat? Does it come naturally? Must be a pretty tough life being such a jerk. I knew some idiots would eventually show up with the hateful and ignorant comments, I just didn't expect them before noon.

It never ceases to amaze me just how many people come back in comments stating "bad parenting". Talk about a bunch of FOOLS!

If only ALL of you knew just how many families are devastated by these drugs. If you think it's only in the hood, you are very mistaken.

Some of the most affluent families here on the shore have been crushed by it. That's a fact. While many of them may be too ashamed to admit it, it's a fact.

As a "parent" I/we have done everything in our powers to be supportive in every way possible. However, if we as parents, (as you claim) have failed, we certainly did our best, all of us.

Many of our children have addictive behaviors, just as many of our parents may have abused alcohol and even drugs. It's an escape that becomes addictive.

Today we live in a society where almost everyone did extremely well. What I mean by that is, we bought homes, we raised families, we bought cars and we even got to a point, (unlike our own upbringings) we bought our children cars. What I feel many never expected was a massive depression. Your government wants to call it a recession but that's a lie, especially here on the shore.

Now our children are up against, I'll never be as successful as my parents. They may have the drive, ability, smarts, street wise, call it what you want, it's depressing our kids.Now THINK, there are MANY who will never achieve much at all.

Once these kids get charged, start stealing, rob and get a record, it's that much more difficult to climb up out of that hole and rebuild their lives. Can success happen, absolutely. But it takes someone extremely strong and driven to do so.

Where the bad parenting come in, (in my honest opinion) is when we as parents enable these addicts. Our hearts want to HELP. We want to lead them in the right direction but unless our kids are strong enough, our best bet is to give them tough love. Yeah, liberals don't like that term and that too is a part of our problem in America.

Look, I'll be completely honest with my name and opinion on this matter. You need to disown them for at least 5 years if it happens a second time. If they are clean for 5 years and you can tell they are headed in the right direction with sobriety, there's a very good chance they'll make it.

Take it from one of those unfit parents who has had to deal with this crap for far too long. Tough Love is the answer and that's my opinion. Oh, by the way, WE SURVIVED without the help of our parents. STOP babying them and force them to GROW UP.

I was an alcoholic at the age of 13 , I had a wonderful mom and an alcoholic father who drank whiskey a lot . I think I picked up the habit from my dad .
My addition last most of my life until a few years ago . It's a very hard to kick this habit . Anyway , spare the rod and spoil the child.

Nowhere here has anyone said a word about the so-called friends who were doing the same thing with her, and may have provided the peer pressure to get her to start.

Bull crap! I have seen kids from the best families make these poor decisions. Why do they do it? I don't know but I will tell you it very rarely has to do with parents. I have a friend who son overdosed. No one in the family smokes, drink, or has ever done any type of drugs. Yes kids make poor decisions. And sometime it cost them their life. Yes this is an epidemic. Look how quickly kids of all ages can jump on the bandwagon and do something. Have you seen these little spinner things kids are walking around with. Hopefully this never happens to any of your kids better yet hopefully you don't have any.

This man gets it! Thank you Joe

My business has exploded along with this epidemic. I could make so much money but when I hear the not only emotional devastation the mothers and families are going though and a lot of the times the financial I won't even take their money from them. I am a psychic reader, a different culture but just like them being a parent links us together.
I can offer my observations. Because I don't judge I get honesty. Many of the mothers (and fathers) admit growing up in the 80's they felt they couldn't socialize and still do to this day without alcohol involved. They admit they looked and some still do for something stronger like a shot of something at times. Same with the kids today. They start with marijuana because it's lost it's stigma. Now just like parents who grew up using alcohol they look for something stronger at times. They look for a better high. Go to heroin and get hooked. Anything that alters a mind is bad. It does lead to worse things like addiction at times. I have not had one come to me out of many who said it was because of a prescription the child got hooked. I'm sure some do.
The best we can do is pray pray for a miracle, for the chain of addiction to break the person free. There isn't anything to be done until the person wants to change. Also parents must show children fun can be had without the mind altering substances including alcohol being involved. Too late for some but young parents must start now.
Also encourage law makers to pass laws when dealers get caught harsh sentences. Make dealers not want to operate in the area no matter how low level they are. And please please please don't encourage marijuana use.
I don't believe it's bad parenting most of the time. If it were parents wouldn't care after child gets addicted. It's something none understand other then a poor choice on the part of someone who decides to use. They make that decision at the time because they want to be high. They want the good feeling. For a few minutes of Heaven they end up descending into a hell on earth and dragging those who love them along. Pray Pray Pray for this to all end!

I agree it's a matter of looking for something more. We who grew up in the 80's and 90's remember the grain alcohol parties, shots and shooters all done to get drunker. The availability of heroin makes the kids today think they will try it just once or twice or 3x's and never again. The feeling they get is so good at the time they say they will do it just once more. Then they are addicted. Getting it off the streets is the answer. Close the boarder and lock up the dealers for forever.

Start executing Drug Dealers. It will slow down the problem.

It's not as simple as "bad parenting" or "good parenting" anymore when it comes to which kids get addicted to drugs.
It has more to do with the fact that this garbage is everywhere now.Any high school aged kid can tell you,they can obtain pills or heroin faster than they can find someone to buy them booze.Its not like heroin dealers are carding people before they buy.
I don't know what the solution to this problem is,but make no mistake about it,addiction is an equal opportunity thing.People of any race,sex or religion are prone to it and to pretend otherwise is delusional.

To- 12:11, 12:13, 12:14 Why is this planet so screwed up if their is a God & Jesus. I have been praying over 50 years and it's only gotten worse? I was told he was coming back in 1980 and I had my bags packed and was ready to go. But since then he-they need more money (churches). I guess he can't manage money very well. We are riding around on a planet that we have turned into one big trash ball full of to many people.

12:28
God gives people free will. The bible is his teaching. It even says that Christians will suffer before he comes back. Pick it up and read it and worry about yourself and not about drama at a church.

The epidemic didn't bring her down. It didn't go out and find her. She went out and found it. She JOINED the epidemic on her own free will.