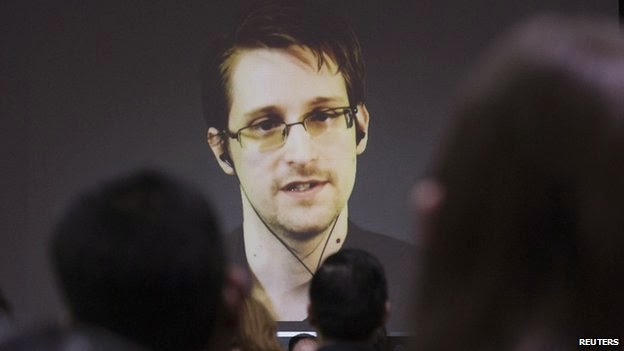 The fugitive US intelligence contractor Edward Snowden says he would love to get asylum in Switzerland.

He was speaking via video link to a Geneva audience, from Moscow where he is sheltering from US prosecutors.

"I would love to return to Switzerland, some of my favourite memories are from Geneva," he said. Previously he worked in Geneva undercover for the CIA.

Mr Snowden, wanted for leaking US secrets, said US authorities had given him no assurances of a fair trial.

"The only thing they've said at this point was that they would not execute me," he said. "That's not quite the same thing as agreeing to a fair and open trial."

NPR reported the other day that the trial would take place in the Eastern Virginia District Federal Court, where there's a high concentration of FBI, CIA, DOD and other federal employees, active and retired, who might make up the jury.

General Petraeus, who divulged national and military secrets to his civilian girlfriend, was charged in the Western District of North Carolina, where a jury is more of the normal citizen type, said the story.

Mr Snowden weaves a tangled web. His associations are very hard to discern.

He worked for a contractor with Booz Allen Hamilton whose Accounting firm Ernst and Young's CEO led the charge against the Boy Scouts of America.

Who also is the accountant for BP of the Gulf spill fame. Who also was pumping Iraqi Oil shortly after Saddam was deposed.

Who are today still pumping in spite of ISIS holding territory that contains those same oilfields.

Now he wants to go to Switzerland the home of HSBC Bank whose shareholders include the Saudi Royals an the Market Funds that our President and Attorney General hold in their portfolios and Holder chose to fine instead of prosecute in laundering Mexican Drug money.

Who the Attorney General was caught giving the same AK-47s to he is demanding Americans cannot own.

So in a Kevin Bacon moment we have Snowden working for the Company charged with accounting for the two largest fines one criminal,one environmental ever dispensed in American History.

Well, yeah. How do you think he was privy to the inside scoop? These are bad companies, and the man finally got enough good information to expose a whole lot of bad guys as a patriotic move to protect our Constitution. And with Switzerland being a neutral country, it only seems right that he should want to live there.