Dover – The Delaware State Police arrested Demitrius L. Hoskins today at 1 pm after he was extradited by Delaware State Detectives from New York to Troop 2 today. Hoskins was responsible for the March 31, 2006 killing of Shelton Smith.

He was formally charged with Murder 1st degree, Possession of a Deadly Weapon during the Commission of a Felony, Robbery 1st degree and Conspiracy 2nd degree. He was incarcerated at the James T. Vaughn Correctional Center with no bond.

Dover – The Kent County Grand Jury has indicted a 22-year-old Newark man for the murder of Shelton Smith. The indictment was obtained on July 7, 2008 after Delaware State Police homicide detectives provided information to the grand jury indicating that Demitrius L. Hoskins, 22 formally of Piano Drive, Newark was responsible for the March 31, 2006 killing.

Police focused the investigation towards Mr. Hoskins after a concerned citizen told them Mr. Hoskins was responsible for the murder. As the detectives proceeded with the case, they were able to obtain cellular telephone records from Hoskins that placed him in the area of the crime when it occurred. Along with additional evidence that has been obtained from investigators linking Hoskins to the crime, the indictment was issued. Police have confirmed that Robbery was the motive for the murder and that Hoskins was responsible for robbing the victim of a large sum of money.

Arrest warrants are on file for Hoskins for Murder 1st degree, Possession of a Deadly Weapon during the Commission of a Felony, Robbery 1st degree and Conspiracy 2nd degree. Currently, Hoskins is incarcerated in Rikers Island Prison in New York on unrelated charges. Detainers from Delaware authorities are being sent to New York to ensure his incarceration continues until he can be extradited to Delaware for the charges.

Please be advised that this is an ongoing investigation with additional suspects being sought. To protect the integrity of the case and future court proceedings, this is all the information that can be released.

Note: The location of the shooting occurred on Dover-Kenton Road south of Cheswold. 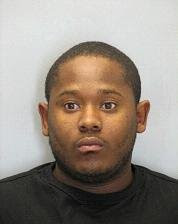 At approximately 5:15 p.m. the victim was dropped off at Kent General Hospital by a friend. The victim was suffering from a gunshot wound to the right upper torso and was rushed into surgery; however, he succumbed to his injuries and died a short time later.

According to the victim’s friend, the shooting occurred in the Cheswold area, but the exact location has not been determined at this time. The friend also advised that the victim was shot by two black males that were operating a dark red Nissan with Pennsylvania registration.

The victim has been identified as Shelton Smith, 20, of Dover.