PO2 (EOD2) Mike Monsoor, a Navy EOD Technician, was awarded the Congressional Medal of Honor posthumously for jumping on a grenade in Iraq , giving his life to save his fellow SEALs.

During Mike Monsoor's funeral in San Diego , as his coffin was being moved from the hearse to the grave site at Ft. Rosecrans National Cemetery , SEALs were lined up on both sides of the pallbearers route forming a column of twos, with the coffin moving up the center. As Mike's coffin passed, each SEAL, having removed his gold Trident from his uniform, slapped it down embedding the Trident in the wooden coffin.
The slaps were audible from across the cemetery; by the time the coffin arrived grave side, it looked as though it had a gold inlay from all the Tridents pinned to it. This was a fitting send-off for a warrior hero.

This should be front-page news instead of the crap we see every day.

Since the media won't make this news, I choose to make it news by forwarding it onto you guys. I am proud of our military and the men and women who serve in it. They represent the highest and finest values of this country. 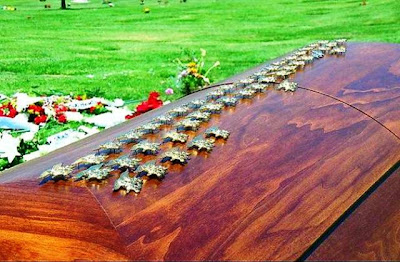 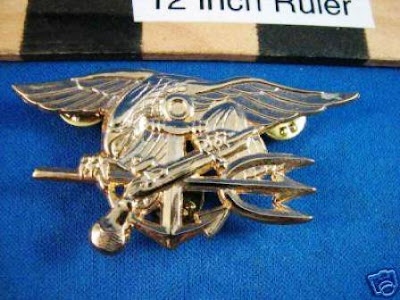 A True American Hero To me!

I would encourage everyone to read
"Lone Survivor" by Navy Seal Marcuss Luttrell. It should make you proud to be an American. If it doesn't,LEAVE!!!

Thank you Joe. This man died a Hero.

I agree, this should of been front page news!

The national media did make it news... weeks ago when it happened. So much for being up on things.

In "Lone Survivor", focus not just on Luttrell's improbable survival; but his team leader (I also believe his name is Mike-dogs got to pee so I can't Google his last name right now) who did not survive the firefight.Despite being completely pinned down by a couple companies of gringos; this guy walked out of cover to exposed higher ground to make an emergency call for air support. He was so calm and focused that he actually thanked the controller for the help before he stumbled back, mortally wounded, into his fighting position. Believe he was finally awarded the MOH a couple years ago.

Got the dog straight....Lt. Michael P. Murphy posthumously earned the MOH October 22, 2007 as a result of his gallantry during Operation Red Wing in 2005. Researching this today it was also interesting to note the Navy has confirmed the last planned Arleigh Burke class destroyer (DDG-112)is now named the USS Michael Murphy.

Thanks for that update. Talk about cool!

Joe. No problem-keep these stories coming. I get real tired of the traitorous pukes on The Daily Times Website who seem to get open blog/comment time to spread 9/11 lunatic conspiracies about how our own government hates us and blew up our own citizens in broad daylight. Let us all show a little more love for the guys/gals making the real sacrifices for our country.

Joe, Those Tridents are literally slapped on to the casket by the brother seals of the deceased & with everyone present dead silent at the time each slap makes a tremendous loud hollow thump and I'm getting chills thinking about it!

I watched the video you posted all the way through.

Bring our men and women home. We are spending 1 billion a week over there for what? 4 dollar a gallon gas? We need to be taking care of our own economy and American citizens, not Iraqis and illegals.

To hear of a 'brother in arms,' giving his life to save the lives of his brothers, is incredibly moving. I cannot begin to imagine what he might have been thinking at that moment, or if he had even a thought at all. The highest honor is not nearly enough for a man of this caliber. I don't believe there is an honor high enough.
I salute you..........

This brought tears to the eyes of a tough old Marine and i cryed.No the Medal of Honor is not enough but God has a much higher place of Honor for that Navy Seal in that pearly white mansion in heaven.
Old salt Marine W.L Early

I have spent the last twenty years as a member of the US Navy the first four with Naval Specail Warfare Unit Four. There are few greater men on this earth than Navy Seals. Petty Officer Monsoor not only exemplifies that embodyment of the Seals but all that is good with the U.S. God bless my brother.