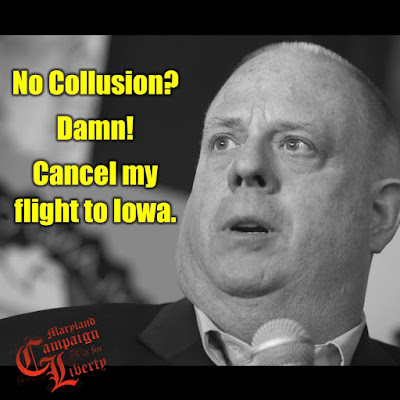 Thanks for making the CCW permit process better! RINO

Larry you and your wife stabbed the people in the BACK.

Hogan, you continue to have my support. You seem like the only candidate that hasn't jumped on some bandwagon and haven't been coerced by Trump's "stable genius" rhetoric. Continue to make common sense laws and you will continue to earn our votes.

All you Trump sheep stfu

For you who voted for and support this RINO, shame on you. What a disgrace for Maryland, and the Cummings are another disgrace, a big disgrace.

Gov. Hogan has his good points and has done some good things for the citizens of Maryland, however, he has really, really fallen short on support of the second amendment, and for whatever reasons continues to support penalizing law abiding citizens when it comes to gun ownership. This will always be a cloud over his Governorship.

Hogan is far better than what would have been the alternative.

All the Maryland Republicans did was put Hogan on the ticket to run, and voted for his first term....and regretted it when we realized he was the proverbial wolf in sheep's clothing. We DID NOT put him on the ticket for a second term. He ran unopposed on the Republican ticket for a second term, because Republicans knew he had secured the second term by voting with Democrats during his first term, therefore getting the Baltimore vote. We couldn't have been any worse off if a Democrat was governor. The first vote for Hogan was the worst vote I ever made (except for Carter).

I hope your reading this RINO Hogan.

He has Special health insurance we the people Don't.

After paying md state taxes on my tax return for years, under Hogan I got a refund of $100+ and this year $800 with less income and no changes in my withholdings.

(:00 your facts are wrong Hogan jumped on the Democrat bandwagon. He would have lost by a landslide if he challenged Pres Trump even in Maryland . Hogan did about 2% of his promises and nothing on the 2nd Amendment like he promised. Hogan the loser.

So you would have preferred the socialist Ben Jealous? Are you crazy? Or a died 9n the blue Democrat?

Nope, Ben Jealous wouldn't have been any different than Hogan. Hogan, pretty much, has just approved everything our state legislators sent to him. And never even tried to sent any gun rights legislation to them. Hogan was/is just a rubber stamp for the Democrat controlled State House. Just saying Hogan isn't any better than a Democrat governor. Not a bit. He criticizes our president as much as any democrat. I, for one, am not like democrats that will support their candidates, thugs and crooks alike, no matter what. A piss poor Republican that doesn't support the Republican platform, doesn't deserve my support. Republicans will vote a bad incumbent out of office. Democrats never do.

Hogan, I support you here in Maryland all the way! But I will vote for Donald Trump, he has done so much for our country! I would consider you in 2024

@9:17 Yeah, we all believe you visit Joes blog and are the one republican who wasn't voting for Hogan at that time.

The world's full of suckers and none are more self evident than people who believe any of the politicians they vote for are going to do anything they tell you they are going to do that doesn't directly enrich themselves.

Happy giving Hogan all your money so he can spend what ever he wants. Keep giving.


Hogan is/was better than either Brown or Jealous would have been. By a country mile.

I give him credit for taking on a formidable challenge in even running as a Republican in MD. And securing two elections. And he's had some coattails.

It is disappointing that 2nd Amendment issues have been relegated to way down the list.

But any of us would have been challenged to make headway against the Annapolis bosses if we were in his shoes.

Hope he'll put his entire focus on MD the remainder of his term and that Lt. Gov. Rutherford can succeed him.

Politics is often like a grind it out running game. If the critics would volunteer and ring doorbells we could continue to gain seats.

The problem is not the Eastern Shore or West Md. But the middle of MD saw enough good to vote for him twice so they can be wooed.

9:00 You just posted on the wrong thread, idiot!