A View Writes: What are your thoughts on renaming the Shorebirds 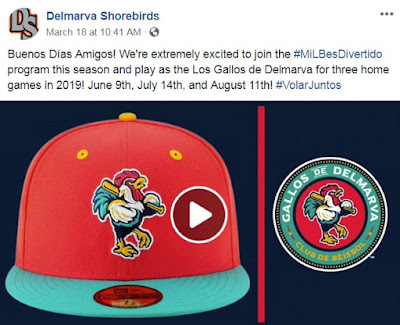 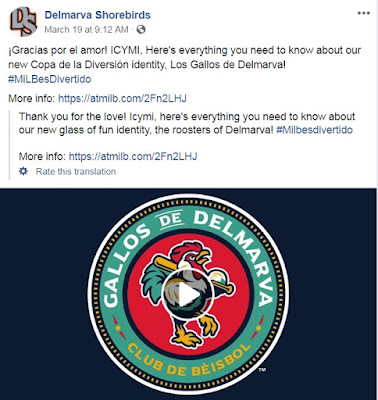 I dunno about renaming the Shorebirds.
Funny thing, though, that Delaware is the Blue Hen State, but the "official" portrait of the bird is of a rooster, making the name the Blue Cock State more accurate.

Put it next to Jake Day's hideous city flag.

Very cool! With so many Hispanic players in the league, and the need for MLB to reach out, it's an easy gesture. Cool logo and name too!

No. Who even has the time to think about stuff like this?

He-- NO. Tired of all this politically correct Bs. Some of these Hispanic players can't even speak English

It’s for 3 games. Other sports leagues do things like this for a few games each season

Can't you all just enjoy all the Winning today and gripe about this another time. Jeesh !!! As bad as the Insane Ones!

We should welcome Latino players and fans with apple pie. Americanize THEM. Do not latinize us! We don’t want the third world here.

I will never attend another game if they do. That is promoting illegals / lawbreakers. The next thing they will have only foreign speaking announcers. Why not make them the JAILBIRDS and wear stripes? That would honor another group of lawbreakers and their families from ECI?

We have become the United States of Latin America. Not good.

Hell no the team should not change it's name. The stadium is in demarva, a part of the U S.A. where we still speak English and use American names. If the name is changed to the "gallos de delmarva" I will "NEVER" go to a game there again. Call me prejudice if you want, I don't care. I'm an American, fly the American flag in our yard every day and proud of it. Frank Perdue will be turning in his grave.

stupid PC crap, will EVERY other ethnic group get a turn to have the team named in their honor? no i didn`t think so, stupid PC crap creates discrimination.

They can call their teams in Mexico, Guatemala, or wherever else anything they want but this is AMERICA, let it stay American - Shorebirds it is, period.

Why does everything have to undergo change?

They do and we will burn their hats in the parking lot. Their flag too. Maybe we will give them a real American welcome when they show up. LOL. I want to know who the a-hole was that dreamed this up.

What's wrong with the name of Shorebirds, is this going to be another Baltimore Colts kind of thing, never satisfied with what they are?

it offends me. i speak english

I think it's cool too.

First of all, they are based in Salisbury, Maryland, which last time I checked is in the USA, not Delaware, and have as much to do with Blue Hens as Grizzly Bears! Secondly, we speak English here. Learn the language if you want to live here, or go back to Cuba or wherever you came from. You should just feel lucky that we serve tacos here.

Now, play ball, that's what I paid admission for!

People are waaaay to easily offended these days. Left, and in this case, right.

So let the Hispanic community support them. No more tax breaks or county funding. Every night can be Hispanic night. They took over the inlet, might as well take this too.

I really think the name should be changed to "ALLAH BE PRAISED" as that
will be the new community in the not so distant future, as is West Virginia
is doing.

Why is there a wall around the stadium? I should be able to watch beisbol for free!

Nothing better to do?

Np I just will not attend any more games